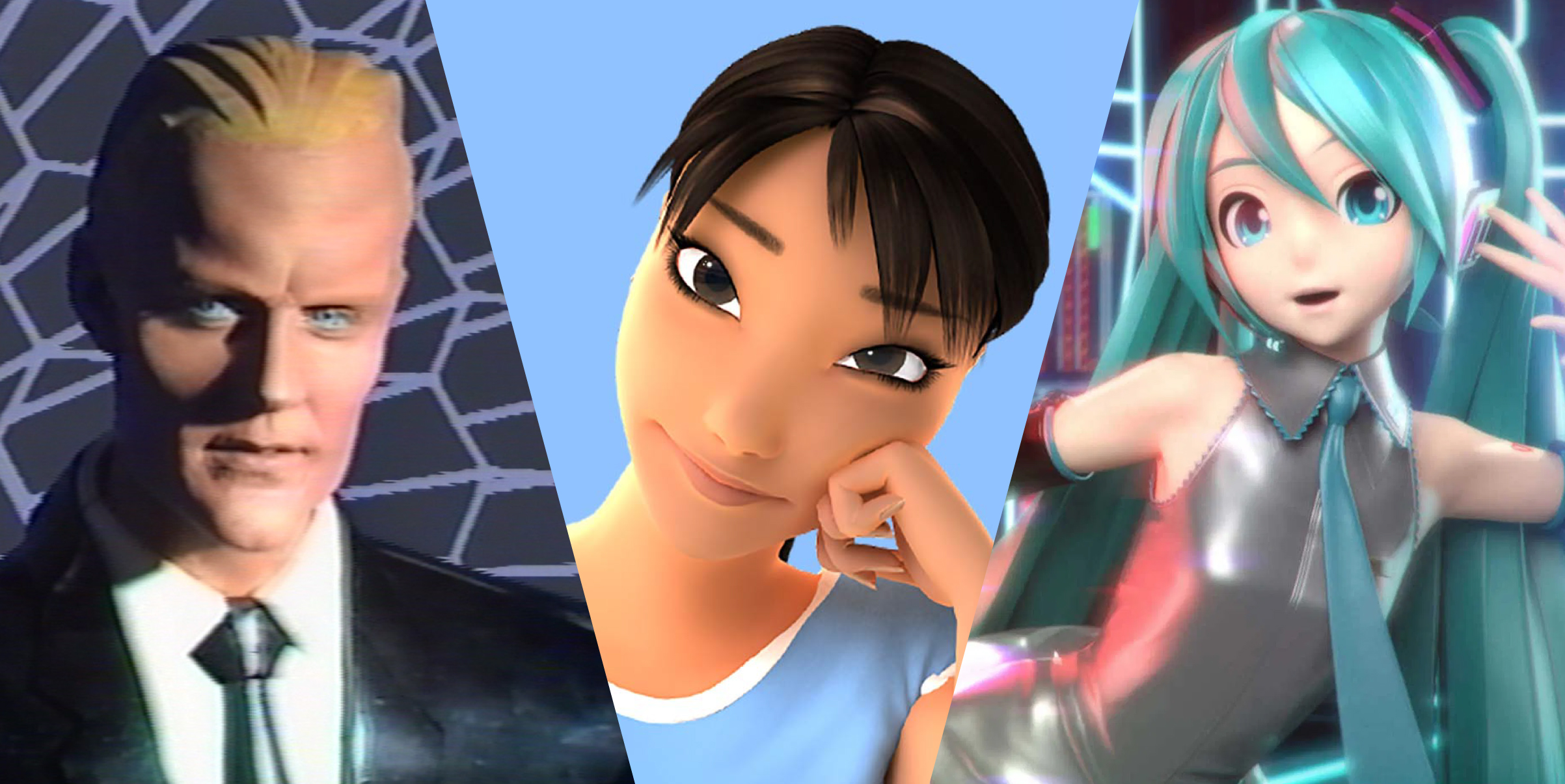 Who Was the First Virtual Influencer?

he idea of a virtual character achieving legitimate, wide-scale fandom may seem like a modern idea. However, the concept of fictional celebrities can be traced all the way back to the 1930s, well before computers were invented, and that’s not even considering the long history of cartoon characters in print.

Every industry is born somewhere, and today I’m setting out to share some of the earliest inspirations that led to the virtual influencer industry as we know it.

Persona-based music groups such as The Archies (1968-1973) and The Gorillaz (1998-Present) are early examples of 2D characters that helped set the precedent for virtual groups like K/DA to succeed today. Talking heads like Max Headroom (1985), who we’ll share more on in a moment, set the precedent for the tens of thousands of VTubers operating today. These early fictional stars proved that celebrities and bands didn’t need to be “real” people in order to gain a very real following of fans, a visionary lesson if you consider the role of virtual influencers today.

Today we’re reviewing the history of fictional celebrities and how they set the stage for contemporary virtual influencers’ success. Let’s dive in, starting with an unsuspecting character...

In 1932, sculptor and retail display designer Lester Gaba created a 100 pound plaster mannequin named Cynthia for Saks Fifth Avenue. Her appearance was so detailed and realistic that she even had human imperfections, such as freckles and pigeon toed feet. Gaba would bravely take Cynthia out on the town and pose with her in public spaces. People and brands noticed, and eventually LIFE magazine asked Gaba to pose for a photoshoot with Cynthia around New York. A media star was born.

Brands such as Tiffany’s and Cartier sent Cynthia the latest jewels and fashion to wear. She received fan mail and invitations to real-life events, including the wedding between Prince Edward VII and Wallis Simpson. Just as today’s virtual influencers add plausibility to their existence by telling their followers they are robots, Gaba accounted for Cynthia’s silence by telling everyone she had laryngitis and was unable to speak.

Unfortunately, Cynthia’s career was cut short when she fell out of a salon chair and shattered to pieces. The press reported her death as though she were real, cementing her role as a fictional media celebrity… even in her death.  Rest in pieces, Cynthia, though maybe it’s time someone brought you back to life virtually? Gaba went on to create a series of hyper realistic “Gaba girls” mannequins, who redefined the retail shopping experience and ushered in the era of lightweight yet realistic mannequins we know today. Every time you go into a store and see a realistic mannequin, you have Cynthia to thank.

The fictional chipmunk trio was created when songwriter Ross Bagdasarian Sr. experimented with a way to pitch up his voice for songs. He created the Christmas novelty record “The Chipmunk Song,” which became a number one hit and even won three Grammys at the first Grammy Awards ceremony.

The addition of three anthropomorphic characters with fun personalities combined with a catchy holiday song helped launch a billion dollar media empire that still continues today. Because Alvin, Simon and Theodore will never age, they can continue to star in new films and television shows with novel designs that appeal to younger audiences indefinitely.

Max Headroom, the first computer-generated TV personality, was a fictional AI who parodied news anchors and talk show hosts with his unique brand of comedy. The reality is that his computer-generated appearance was actually the result of special effects makeup applied to actor Matt Frewer.

In 2007, Crypton Future Media created a voice synthesizer software named Vocaloid. The software generated a voice, fully computerized, that could sing words and hit notes when programmed correctly. The singer-in-a-box concept was a hit for aspiring music producers who wanted accessible vocals for their tracks, using it to create tons of songs with the Hatsune Miku name as a feature. Hatsune Miku may have began as the humble personification of  a piece of software, but she went on to become a global, virtual pop sensation.

Thousands of independent music producers have created unique songs and videos starring Miku, many with highly immersive plotlines. From pop ballads to heavy metal, Miku provides a voice for all kinds of music that has built her powerful fandom over time. Fans have flocked to her infamous hologram concerts for more than ten years.

Hatsune Miku is a true testament to the power of a virtual character achieving fame—a global icon.

Over 10 years ago, before Kizuna AI ever uttered the word ‘VTuber’ the first true animated YouTuber, Ami Yamato was creating vlog content with a virtual persona. In the 2010’s everyday vlog (or video blog) videos were a popular content niche, but Ami Yamato was the first one to do it as an animated version of herself.

Ami Yamato creates videos about her life moving back home to London after living in Japan for a period. She does not acknowledge being animated and any questions about her being a VTuber will be met with confusion at the term. Ami Yamato’s unique blend of animated vlog content helped set the stage for modern VTubers and virtual streamers to succeed on other platforms such as Twitch today.

On April 23, 2016, Miquela Sousa made her first Instagram post as @lilmiquela. Her photos had everyone wondering, “Is she real?” Miquela continued to post cryptically from her first-person POV as though she were a real human and played the brewing mystery strongly in her favor, riding a vast wave of mass media coverage to rack up millions of followers before ultimately revealing she was a robot (to clarify: Miquela is not a physical robot. She is a fictional, virtual character telling the story of a robot girl.)

Now with over six million followers across Instagram, TikTok and YouTube, Miquela has become the quintessential virtual influencer. She’s still your classic cool girl, LA influencer but she also happens to be a robot, and that’s why her followers are so invested in her content. Her storyline as a robot not only provides a reason for her existence in our world, but also gives her a unique, compelling edge that keeps fans wanting more. In fact, the role her fans play is so important that they have decision making power over her storyline.

The answer to the question “Who was the first virtual influencer?” depends on who you ask. Ami Yamato and Any Malu were both making videos as a virtual Youtuber ten years ago, long before Kizuna AI said the word ‘Vtuber’, and Ion Gottlich was a virtual character posting on Instagram for a year before Miquela hit the scene. Even brand mascots like the GEICO Gecko or Lu of Magazine Luiza in Brazil eventually evolved into modern virtual influencers. If you're curious about their actual order of appearance, we track all that information right here at Virtual Humans.

The list in this article is by no means exhaustive, but meant to illustrate how the concept of a virtual influencer dates far back before social media existed.

Without early trailblazers like Cynthia the mannequin or Alvin and the Chipmunks, we may not have the diverse selection of virtual influencers we have today. They come in endless forms, from the hyper realistic Miquela to a talking sausage—but, the fact remains: they’re all fictional, and their fans love them for it.