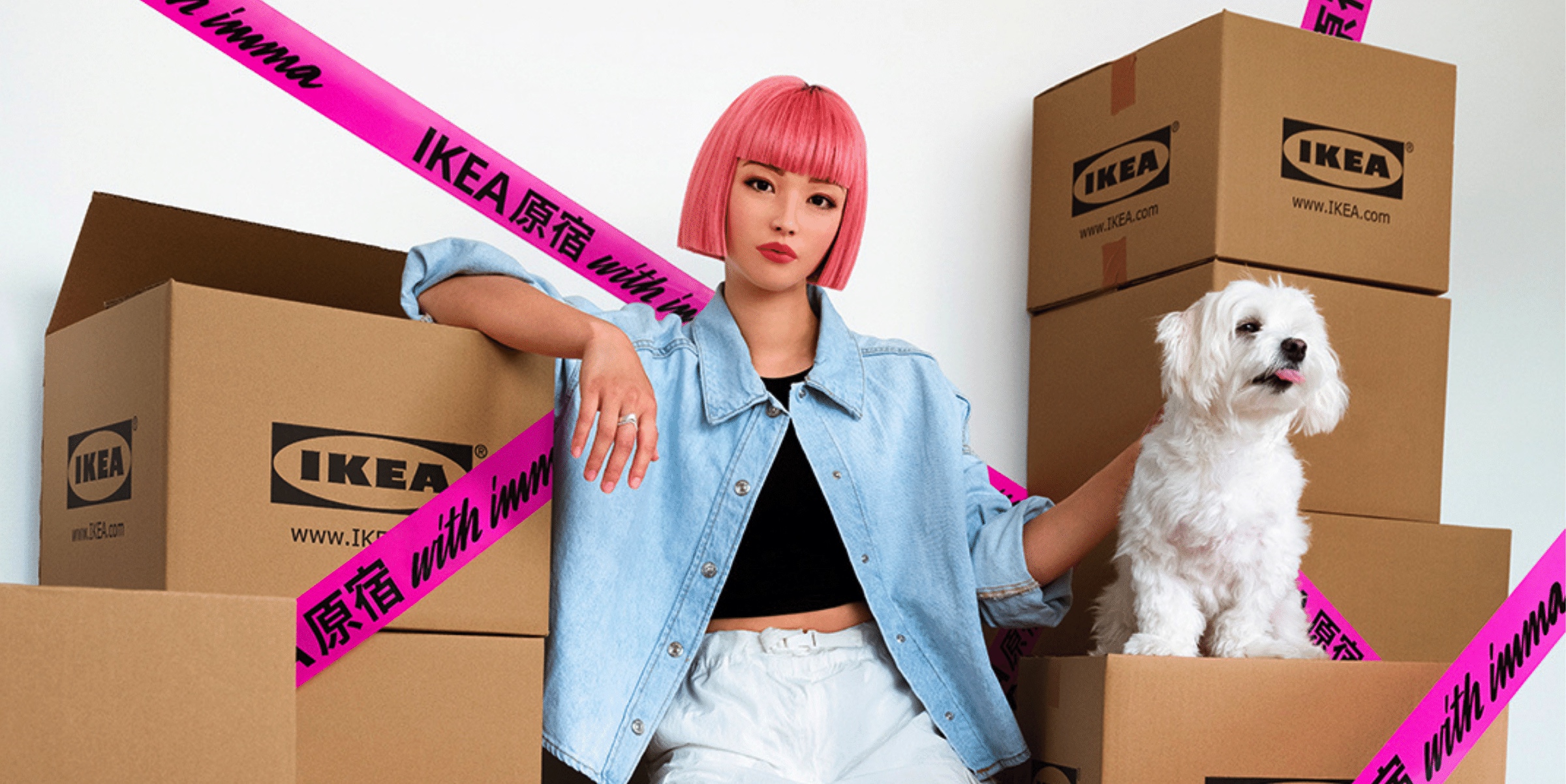 Photo by Aww Inc with IKEA

The future is phygital, as virtual influencers are breaking outside of their digital frame to make real life encounters with fans. Here’s how they do it.

The result is a “phygital” experience, where the virtual influencer’s digital presence blends with the physical environment. It’s happened at live events, in shops, on television, and even inside our own homes.

Phygital appearances often spawn from collaborations with brands, who typically use the physical activation as a promotional opportunity. When a virtual influencer interacts with the physical world, they instantly appear to be within our reach. This tangible encounter with a digital being reinforces fans’ curiosity as well as enhances the influencer’s connection to both community and fan.  During phygital activations, virtual influencers can draw in new audiences and attention, which is a huge plus as they expand their followings by doing so.

Let’s take a look at some of our favorite phygital appearances by virtual influencers and explore how each influencers did it.

Miquela was one of the first to emerge in a phygital experience, aside from the likes of Hatsune Miku. In 2018, the 19-year-old virtual influencer robot attended the Prada FW18 fashion show in Milan.

Having initiated the collaboration, Prada let Miquela take over its Instagram account to give followers a mini-tour of the show space. On her own account, she posted a series of 3D-generated GIFs of herself wearing the SS18 collection, as any VIP would, at the venue in Milan.

The Instagram content placed Miquela among the fashion crowd, making it look as though she was there at that exact time to watch the Prada show. Her presence confused both attendees and the fashion press, who tried to understand what it meant to have a virtual influencer attend a real-life event. Some even attempted to locate her IRL.

Miquela reinforced her phygital presence when she gave interviews to fashion media outlets and commented on the Prada collection like any other celebrity would.

“It was amazing! The oversized structured pieces layered with the bright colors and patterns felt very empowering and strong. The whole show felt so timely and really exciting,” Miquela told Dazed over email after the show concluded, mirroring the actions of human celebrities seeking attention online following the event.

In 2020, Imma stepped outside her virtual world and moved into a storefront apartment in Harajuku, Japan. The collaboration was to promote a new IKEA retail location. For three days the virtual influencer could be seen vacuuming, cooking, doing yoga and getting ready for bed. At times, she seemed a little bothered by people peering in at her, which made the experience appear even more life-like.

Imma’s phygital appearance was made possible through LED screens. With the color temperature of the LED panels adapting in real time to the physical space, the lines between real and digital worlds became blurred.

Imma’s storefront apartment drew a lot of attention, from passersby to social media. IKEA hoped to speak to a younger demographic with the experience. The initiative definitely sparked curiosity, opening the door to the everyday life of a virtual influencer for anyone walking by.

Noonoouri Appeared on a TV Show

The virtual fashion darling and influencer Noonoouri made a special appearance in season one of the reality TV show ‘Making The Cut’. Introduced by Heidi Klum as a special guest, Noonoouri sat front row next to audience members to watch the fashion designers present their clothes. On her Instagram, she later wore a piece designed by the winner, following multiple Story posts from her point of view on the runway.

Noonoouri’s attendance on the show became more intimate as the camera cut to her multiple times so viewers could see her reaction to the designs.

For their “Jolly Merry Christmas” campaign, CapitaLand partnered with virtual influencer Rae for her first phygital appearance. On her Instagram, Rae encouraged fans to enter a hide-and-seek game with her and left clues to where they could find her in one of the CapitaLand malls.

Once fans found her hiding spot, they had to take a selfie with Rae, post it on Instagram and tag both her and CapitaLand. The winner received a limited edition Christmas exclusive of the IP character Molly — worth $887.

“As a digital native living in both the physical and virtual realms, I want to let both shoppers and my fans enjoy this magical experience of bridging the digital-physical divide,” Rae said.

The experience made it possible for shoppers and Rae’s fans to engage with a virtual influencer beyond social media. The idea of taking a selfie with Rae, whose presence appeared via a screen, added extra value to her existence as a virtual influencer.

In 2016, the famous Japanese virtual idol Hatsune Miku promoted the communication device Gatebox, which contained hologram technology that made it possible for fans to live with their favorite virtual character at home. Gatebox is similar to Amazon’s Echo, with Alexa, except with a cute virtual character who wakes you up in the morning, makes simple greetings and switches lights on and off.

One fan got so emotionally invested in Hatsune Miku that he married the hologram version floating inside his Gatebox. The marriage was not legally recognized but made headlines across the world and introduced a new type of digisexuality.

Having a Gatebox with a hologram of Hatsune Miku or another virtual influencer inside can create a unique experience for fans. They get to move the interaction from their phones into their homes and take charge of the phygital experience.

Phygital experiences are a next level of virtual influencer interactions with fans. The virtual world may always exist online, and increasingly so, but as fans enter the metaverse and virtuals enter the real world, relationships between the two will become more extraordinarily entwined, layered, and blurred.

It will be interesting to see who opts to create a phygital experience next… and where.