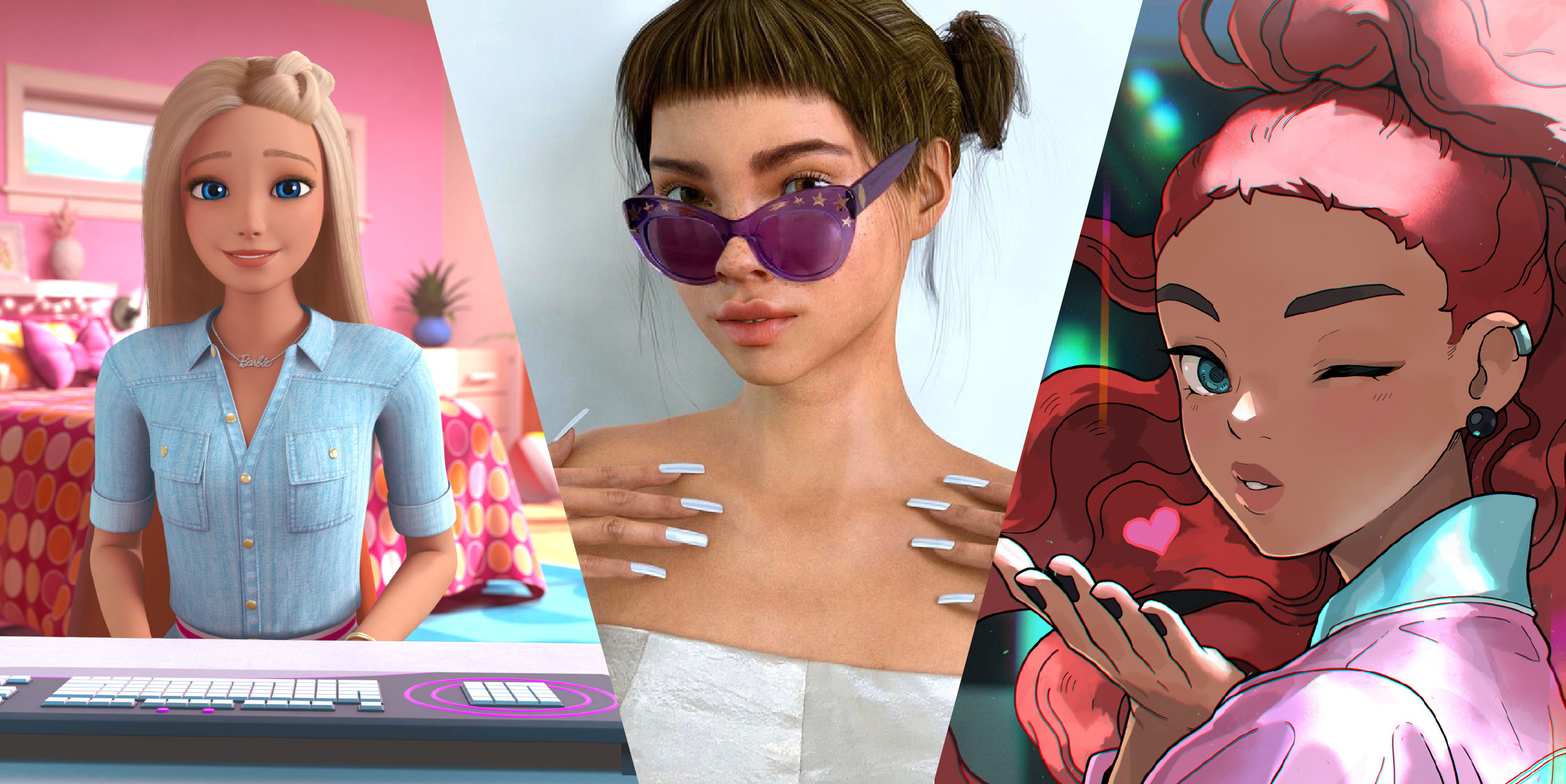 Why Storytelling Can Make or Break a Virtual Influencer

Everyone has a story to tell— especially virtual humans.

virtual influencer could have captivating visuals and high glance value, but that means nothing without a compelling story to give it life. Digital characters need an in-touch storyline to provide context and motivations for their actions. Stories connect us to virtual influencers, helping us form new-age parasocial bonds. Without a well-thought storyline behind them, a virtual influencer is just a character on a screen existing in the vacuum of social media—colorful pixels.

Mattel reimagined their most iconic character Barbie by launching her latest career as a VTuber (or Virtual YouTuber). She’s the girl with over 200+ careers on her resume, but now that she’s no longer just a plastic doll, this career is surely her most important yet.

Barbie has been “brought to life” previously in animated movies, but this is the first time she’s not playing a princess or fairy: she’s just being herself in front of a webcam.

Barbie released her first vlog, “10 Things About Me” in June of 2015, going on to release over 150 vlogs since. The topics range from cooking videos to popular challenges, and most importantly: life advice. Barbie uses her platform to discuss everything from mental health to racism in a responsible, socially conscious manner that sets a good example for her young followers.

For decades, Mattel has attempted to push back against the belief that Barbie contributes towards sexism or unrealistic expectations for women by making her a role model for young girls. However, her image as a “role model” never quite stuck until the Barbie vlogs were released, giving her story life. Mattel recontextualized the iconic Barbie by making her a VTuber, which made her more appealing to a new generation.

Miquela Sousa is one of the most famous and industry-defining virtual influencers in the world, with over 3 million followers on Instagram and numerous designer ad campaigns under her digital belt. She’s the epitome of “cool LA girl” with her signature space buns and streetwear fashion, but what’s really special about Miquela is how she tells her story on Instagram.

When Miquela first posted to her Instagram account in April 2016, she made no mention of being a virtual human. She simply posted as usual and let the speculation build around her until she was “Instagram’s biggest mystery.” Followers didn’t learn the truth until 2018 when Miquela’s Instagram was "hacked" by fellow virtual influencer Bermuda, who utilized the platform to threaten Miquela into revealing herself.

Forty-eight hours later, Miquela regained control of her Instagram account and admitted to her followers that she was not a human being but a robot programmed with human memories. In her notes app post, she explains that an evil organization had created her before being rescued by the company called Brud, who now manages her.

Miquela’s display of vulnerability only made her more appealing to her followers. The three-day spectacle of Miquela’s Instagram being “hacked” and then returned to her by a fellow robot was not just an impressive display of digital storytelling—it was a way to show Miquela as a sentient being who makes her own decisions. The personally written notes app post was the perfect icing on the cake.

The story of Eugene, aka the World Record Egg, is a modern social media fairytale. In January 2019, a photo of a simple brown egg was posted to Instagram with the challenge to beat the record of most-liked photo on Instagram (which was previously held by Kylie Jenner.) Within ten days, the record of 18 million likes for a single photo was surpassed. Eventually, the post received over 55 million likes, solidifying its place as the most liked photo on Instagram, by far.

The transition from inanimate egg to virtual character was an interesting one. In the week leading up to the Superbowl, Eugene's Instagram account @world_record_egg posted a series of photos with cracks appearing in each photo. On February 3rd, Eugene was brought to life and spoke for the first time in a video on his Instagram.

In the video, Eugene shares “Recently I've started to crack, the pressure of social media is getting to me. If you're struggling too, talk to someone.” In the full video on Hulu, it was revealed that the egg was a part of a mental health awareness campaign. Since then, Eugene has continued posting funny comics and tips for maintaining good mental health. His fear of “cracking” is a clever metaphor to describe the anxiety many humans face daily.

The digital storytelling for Eugene was exceptional because it was the first time an inanimate object came to life as a virtual being—and for a great cause that many could relate to.

FN Meka is a virtual influencer and AI robot rapper known for his signature “hypebeast” style. Read our interview where we caught up and chatted about his music career. He’s one of the most popular virtual influencers on TikTok with over 10 million fans waiting for him to post the next augmented reality video.

His TikTok features AR designer collaborations and fictionalized products, such as a PlayStation 5 that also serves Starbucks coffee. In fact, he even sold his neon green Lamborghini toilet as an NFT for $6,500.

What really makes his digital storytelling impressive is the inclusion of another virtual influencer named FN Nxrmal. He can best be described as FN Meka’s nemesis. According to his first Instagram post, Nxrmal escaped from a place called Factory New (which is where the "FN" namesake originates). Since then, he’s been making beats and occasionally causing trouble for FN Meka, like in this video:

Not only is the video an impressive blend of AR and 3D animation technology, it also ties the storylines of FN Meka and FN Nxrmal together. The two have beef with each other that emulates the rivalries often seen in the rap music industry.

The story of FN Meka versus FN Nxrmal is a reminder of the importance of including other characters in a virtual influencer’s storyline. Seeing the two characters interact with each other brings them to life and tells each of their stories in a new way.

5. Liv in the Future

Virtual influencer Liv started out as your normal high school graduate with no plans for the future. Until, one day, she accidentally fell into a portal that transported her to the year 3000. Since then, she’s been trying to figure out life in the future alongside her new friend Alix.

All of this has been documented on her Instagram account where you can see photos from before and after she fell into the future. It’s an impressive feat of digital storytelling that uses the platform Instagram to tell Liv’s story through posts. Her captions are written like they were really made by a teenager from 2019 posting in the year 3000.

Her story is told through multiple formats, now primarily through an app called Litty where you can read through her journey in webcomic style. She’s the first virtual influencer to take advantage of the interactive storytelling to launch narrative driven apps like Litty, which are increasing in popularity. Her world-building goes into great detail and her fans love seeing recurring characters and objects (like vanilla-flavored Doritos.) It’s the unique combination of narrative, characters, and world-building that makes Liv so special to her followers.

All of the influencers listed here, and more, use digital storytelling in innovative and engaging ways to connect with their fans. Whether it’s through Instagram, YouTube, or an app like Litty, the possibilities for virtual influencers to share their fictional stories are limitless. Crossovers, immersive worlds, and more bring virtual influencers to life in new ways—it's all in how you tell your story.