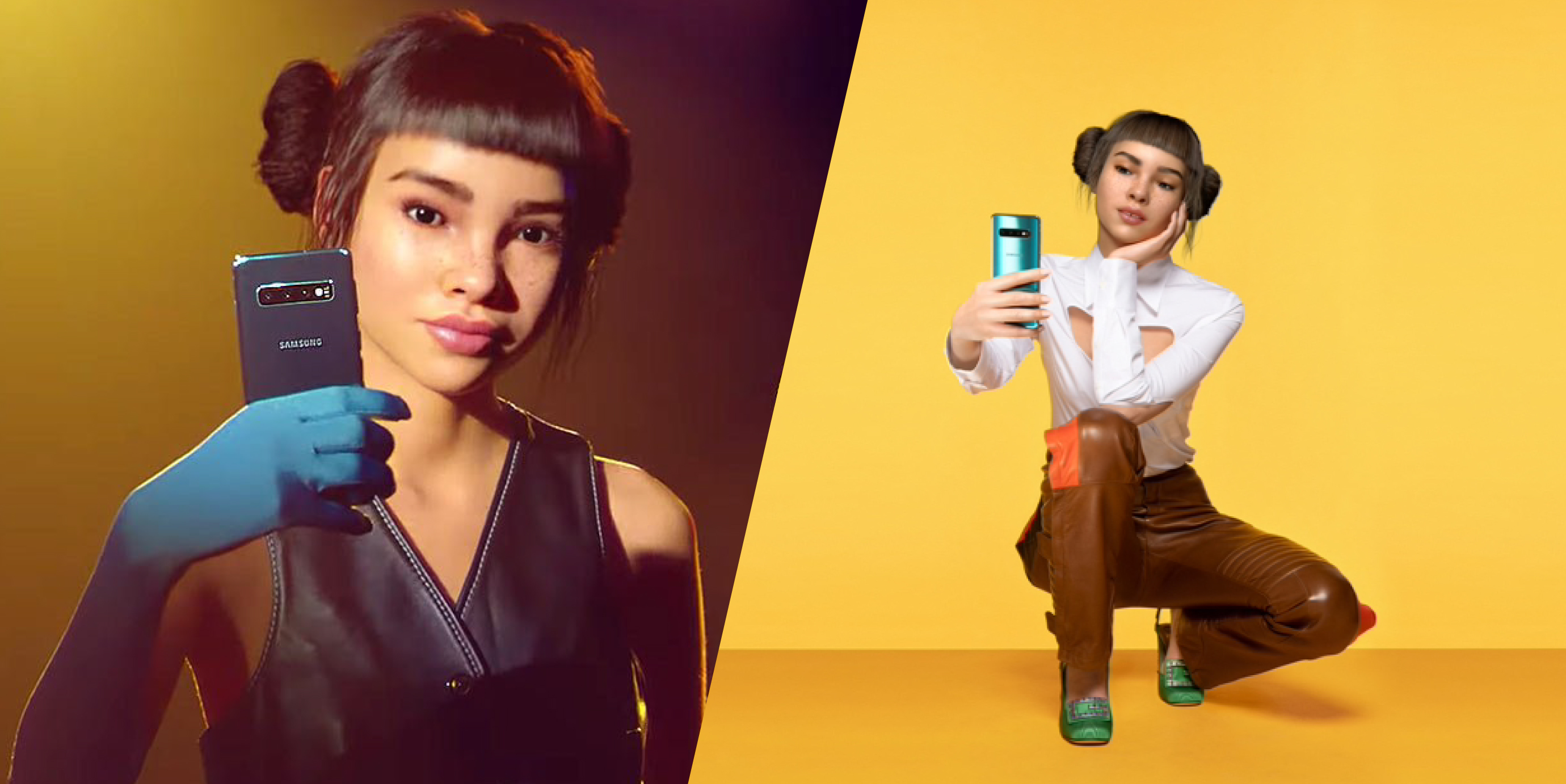 From Miquela using a Samsung Galaxy phone to Imma starring in the latest Lenovo campaign, the tech industry is obsessed with virtual influencers—and for good reason.

Take, for instance, Lu de Magalu, the best-known virtual influencer face of a tech retailer. Created in 2003, she was originally the voice of an in-store salesperson for Magazine Luiza’s e-commerce websites. She has since become the entire brand’s spokesperson, utilizing her vast YouTube and social media presences to do so.

Virtual influencers exist beyond human possibilities due to their technological origins. As digital humans, they are part of the future—an improvement on what’s current. Their existence as technological innovations, alone, makes them a great fit for tech brands.

Being a virtual influencer allows Miquela to engage with various creative fields in unique ways. She can effectively do anything she wants, just like Samsung’s Galaxy phone offers customers limitless possibilities. In this way, Miquela’s device becomes an extension of herself—and, if you’re Samsung, the same would hopefully be said for us and our devices.

“I am the product of technology myself, so I can relate to Samsung in a way that’s a LOT more literal than most people. Whether it’s sharing my thoughts on the issues I care about or just riffing on style, it’s all done through my Galaxy S10 - which I’ve named Samuel Phonington III,” Miquela said during the campaign.

Since then, Samsung turned to yet another virtual influencer—Shudu. The virtual supermodel created by The Diigitals appeared in a Galaxy Flip commercial next to two real-life models. By using the beautiful and hyperrealistic influencer, the campaign spoke to both technology and design innovations. As The Diigitals wrote on Instagram, “The fusion of beauty and technology in this beautiful device is iconic and represents everything Shudu stands for.”

Not only are virtual influencers the face of the future, they possess uniquely technological personalities and looks. This was one reason the computer brand Lenovo teamed up with Aww Inc’s virtual influencer, Imma.

The campaign “Yoga For All of Us” encouraged people to express and embrace their creativity. Imma is a product of technical and creative skill sets enabled through a computer. She’s also a social media personality and virtual celebrity, making her appear like an “It” girl with creative interests.

As Xiqiao Liu, Chief Marketing Officer at Lenovo, said, “Imma, with her larger-than-life style and dauntless attitude, is a perfect partner for us in our quest to celebrate each customer’s uniqueness and spark their creativity.”

As part of the campaign, Imma also featured on a big 3D billboard in Japan, which she encouraged fans to visit through her Instagram post. Onlookers saw the virtual influencer peaking out, waving, and just hanging out in her new location.

Lu de Magalu created a consistent face for Magazine Luiza while selling tech products in a fun and engaging way through her YouTube tutorials. Lu’s social media accounts helped the company build a fanbase of more than 55 million across social platforms, not even counting the number of people who see her daily on the topbar of Magalu’s website or on their app icon.

In addition to attracting a huge following, virtual influencers can humanize an entire brand identity and become the most personal representation of a company’s values. They humanize the products, making our use of them a fun encounter, like robot Miquela did by naming her Galaxy S10 Samuel Phonington III.

In 2021, LG electronics introduced its own virtual influencer, Reah Keem. She is a traveler and DJ with an upcoming album release. Scrolling through her Instagram, Reah Keem doesn’t promote products as other virtual influencers do. Instead, her world and personality revolve around music. LG’s choice not to use her as an advertising opportunity from the get-go allows her to gain credibility and establish sincerity, both important for attracting fans… a clever move on LG’s part.

According to the company, their brand philosophy is founded on humanity. Reah Keem reflects that philosophy, as she displays human abilities and interests. To live out her dream as a DJ and artist, she requires electronic products in her world, from sound systems to computer accessories. The potential is certainly there for LG to feature their devices with her in the near future.

Even though consumers are becoming accustomed to more virtual influencers in campaigns and on social media, digital humans still possess a big wow factor. They generate high engagement and mentions on social media and are known for easily attracting a large following of Millennials and Gen Zs, a feat attractive to any industry.

Most tech companies have been in business for more than a decade. By using a virtual influencer, they introduce their products to a new, younger audience. It shows their devices are keeping up with the digital world.

Virtual influencers are the influencers of tomorrow. Whether they star in campaigns, tell stories for the sake of entertainment, or exist as full-on brand ambassadors, they come with a string of commercial benefits. Virtual influencers make consumers reassess the brand and make tech more digestible, fun, and engaging through their unique personalities and visual draw.

What do you think about LG electronics introducing their own virtual influencer?

Which tech brand should acquire a virtual influencer next?