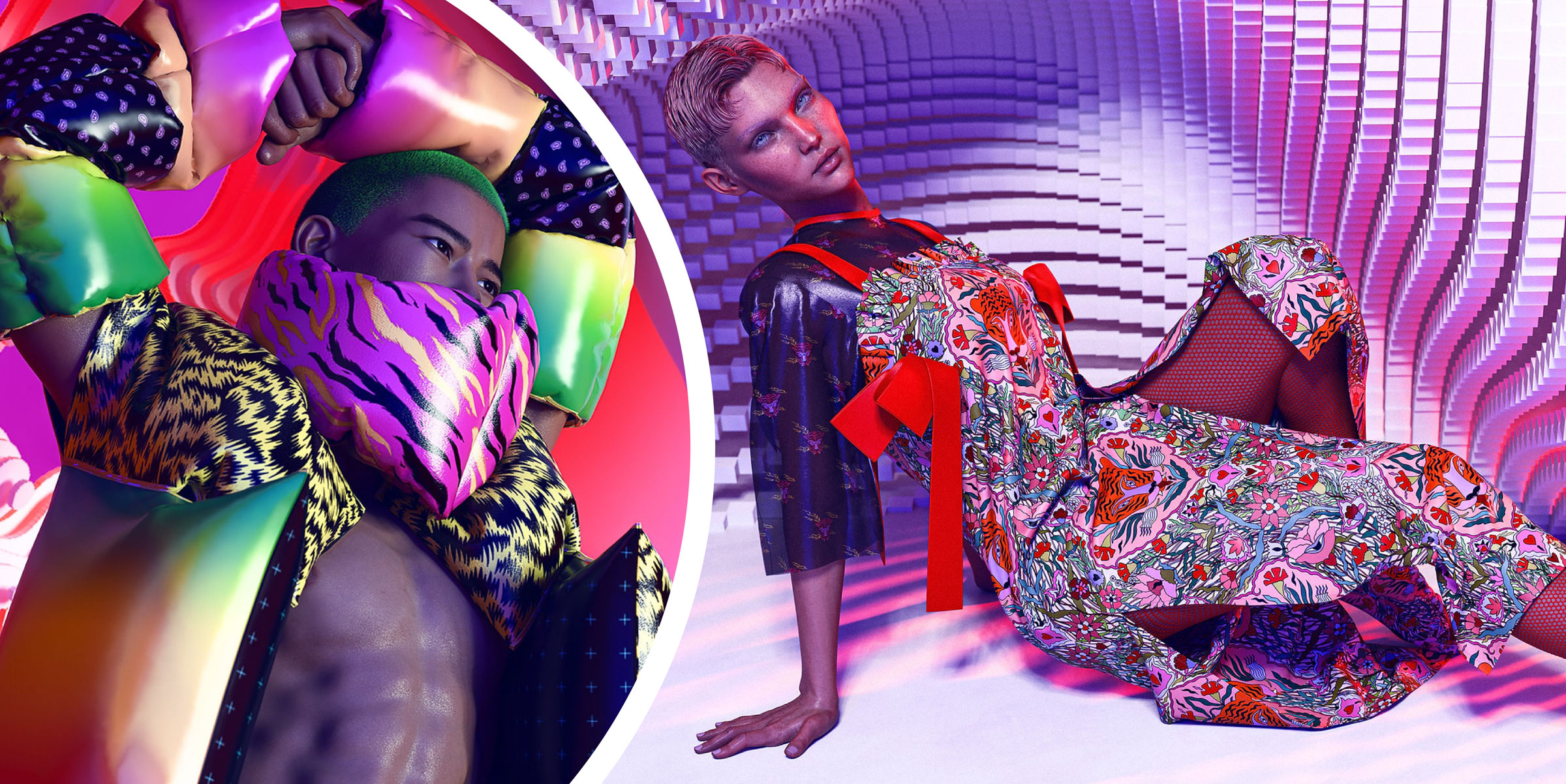 Photo by The Diiigitals and Virtual Rags Studio

Virtual Influencers: The Future of Fashion

Virtual influencers are the perfect opportunity for fashion to enter the new digital race.

n 2018, Lil Miquela, Shudu and Noonoouri became some of the first virtual influencers to grab the fashion industry’s attention. Lil Miquela attended the Prada FW18/19 show in Milan, taking over the fashion house’s Instagram account along the way. The collaboration was an impactful and memorable move for Prada, leaving the fashion crowd to wonder why and how a virtual influencer was at a physical, live event.

Each collaboration opened people’s eyes to the possibilities of what a virtual influencer model could bring to the industry, especially with fashion brands in mind.

Exploring virtual content on Instagram, you can’t avoid encountering fashion, especially virtual influencers decked out in fashionable garb as they achieve higher engagement rates than traditional human influencers. The fashion landscape is rapidly expanding its virtual horizon to prepare for a future in lockstep with virtual influencers, the new key players in fashion marketing.

Here’s a look at how the world of fashion has embraced virtual influencers and how you can maximize the opportunities at play.

The most accessible way fashion brands can engage with virtual influencers is by dressing them. As the virtual fashion darling of them all, Noonoouri pulls off a new chic look every day in visually enticing images. It’s no surprise fashion brands are eager to dress her in their latest collections. Noonoouri has worn Versace SS22 collection right off the runway in Milan and been styled by Balenciaga, Valentino, Lacoste, Isabel Marant, Victoria Beckham and Prada.

It’s not only in new-season that fashion brands choose to dress her. The virtual influencer has worn iconic archive pieces from Alexander McQueen, Viktor & Rolf and Thierry Mugler. Dressing in recent runway collections as well as archive pieces, a virtual influencer brings a great opportunity for fashion brands to digitally promote their past and present fashion legacies, creating both excitement and nostalgia for fans.

Rae is a virtual influencer who has discreetly entered the fashion promotion scene. Some of her outfits are without a label. Sometimes, H&M, Nike, Zara or Rhude are subtly tagged in her posts. Compared to Noonoouri’s staged and flashy representations of the clothes, Rae’s outfits are part of her storytelling and wardrobe. She wears them for everyday activities, such as playing an arcade machine, go-karting, shopping or relaxing at home.

This strategy is beneficial to fashion brands because it resonates with everyday consumers. The virtual influencer’s storyline adds an accessible lifestyle element and personality to the clothes.

Fashion creates its own virtual influencers

Some fashion brands have entered the race by creating their own virtual influencers. The lifestyle e-commerce Yoox created virtual influencer Daisy to promote fashion brands stocked by the company. Daisy doesn’t have her own social media but exists only on the fashion retailer’s Instagram, giving them complete control of her digital narrative. With her images uploaded next to real-life people, Daisy appears very life-like. It will be exciting to see if Daisy spins her own narrative.

Yoox could build a world around her, where she could experience life in the clothes, engage more with her fans and become a full personality for the retailer.

Recently, Prada introduced their very own virtual model, Candy, to front the re-launch campaign for their perfume line, Prada Candy. The luxury brand described the initiative as an opportunity to stimulate digital interaction with young consumers and reach new digital heights. She could prove to be a strong strategy for promoting the perfume across social media platforms, should Prada choose to develop her further as a brand ambassador.

While Prada leveraged the bare minimum effort to create this "virtual", Candy still has the potential to become a virtual influencer with an engaging storyline, connecting to target customers and their lifestyle.

Since Shudu appeared as part of the Balmain virtual model army in 2018, she has been the face of numerous campaigns and fashion collaborations, including Salvatore Ferragamo, Christian Louboutin, Ellesse and most recently the sustainable Re:Style 2021 collection by Hyundai Lifestyle.

The Diigitals, who created Shudu, describe themselves as a virtual modeling agency. With their captivating, beautiful and unique looking virtual supermodels, The Diigitals make it possible for fashion brands and publications to easily utilize virtual influencers and explore the opportunities they offer.

The magazine appeared to have created an entirely new dimension for fashion and its readers to immerse themselves in. By welcoming a virtual influencer into their pages, fashion magazines have the opportunity to breathe new life into their editorials, reinvent fashion as a digital commodity and stimulate readers by presenting a future reality.

Virtual influencers aren’t the only future of fashion. So are digital doubles. Burberry introduced a CGI digital double of model Kendall Jenner for the TB Summer Collection in 2020. A year later, the fashion brand presented a second digital double for their TB Summer Monogram collection, the iconic supermodel Naomi Campbell.

Digital doubles offer unique potential for the celebrity as well as the brand. They can appear in various multimedia settings, from campaigns to games. They can appear ageless, even if the celebrity has passed on. At the same time, they can build a digital image and narrative on social media, making themselves into effective virtual influencers for brands who know how to use them.

What future do virtual influencers bring to fashion?

Fashion’s excitement for virtual influencers is real and for good reason. Not only do they have a higher engagement rate than traditional human influencers, they are an evident and accessible strategy fashion can use to bridge to the digital future and grab the attention of young consumers.

Virtual influencers can present previous and current fashion collections and accessories in new, refreshing ways. By using them, fashion brands become part of their engaging storylines, personalities and ultimately their emotionally invested communities. This is an important concept because a virtual influencer’s success is built on a world that fans can relate to and engage with.

As brands collaborate more and more with virtual influencers, or create their own, they will have an exceptional opportunity to reach these communities. Brands can visualize and customize a virtual influencer to represent their brand identities, product values, and to mirror the target customer.

With the prospect of virtual influencers potentially becoming replicas of ourselves, online shopping would change, too, as we try on digital outfits before purchasing the physical. Even after our physical selves are long gone, our virtual influencers will still be here, available for social events, fashion collaborations, campaigns, and editorials.

The future is digital and virtual influencers are the new vogue.