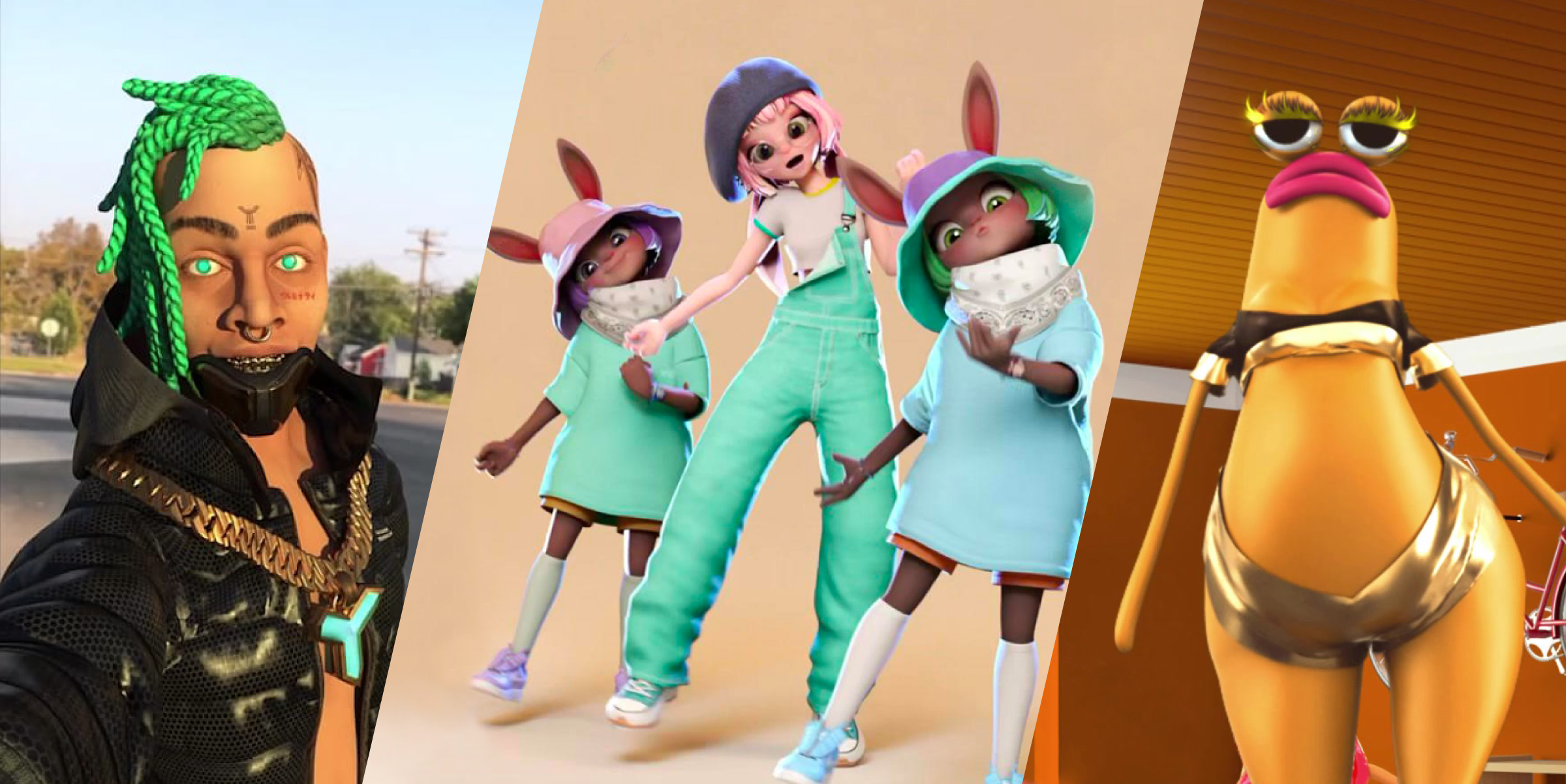 TikTok is a game changer for virtual influencers to better express themselves through video while growing quickly. But how? We spoke to some of the top virtual TikTokers about how they achieved success.

ost virtual influencers, such as Miquela, Shudu, Imma, and more, first found fame on Instagram—and many still do. Nevertheless, TikTok has become a key platform for these futuristic influencers to build massive Gen-Z and Millennial audiences. The video platform boasts 1B+ monthly active users and an impressive discovery-centric algorithm, so the opportunity for growth is ripe.

So, how do you create a strong and engaging TikTok presence as a virtual influencer? We spoke with the creators of some of the most popular virtual influencers on TikTok to find out what it takes. Here’s what we learned.

Everyone knows that standing out from the crowd is important on social media. Virtual influencers are, inherently, out from the crowd, and many are finding virality just by existing on the platform. The caveat, though, is how difficult or expensive it can be to create hyper-visual, virtual content—it’s truly a blue ocean opportunity at the moment.

Evidently, though, it’s becoming harder and harder even for a virtual influencer to stand out at this stage in the TikTok algorithm lifecycle:

“Until a few months ago, a virtual character could grab attention on TikTok just because it was unusual. But the novelty has mostly worn off. Now a virtual character needs to be on the cutting edge of visual effects or have a truly compelling personality. And, of course, the content has to be catchy. It’s not that different from any other type of influencer,” says an anonymous virtual creator with 3 million followers.

One example of a visually stimulating virtual influencer is FNMeka, who mainly creates original videos that highlight street culture and his unique, robotic style. Since he first appeared on TikTok in 2019, FNMeka has gained more than 10 million followers and generated more than 130 million likes. With his cyborg appearance, this robot rapper uploads extravagant, mind-blowing content as unusual as himself. Picking up a Lamborghini with a Tesla garbage truck or shooting a turkey with Apple AirPods for Thanksgiving, for instance, is not something one sees every day.

Biomechanical cyborg LV4 has accumulated an impressive fanbase of 141k+ TikTok followers. His content focuses on fun and frustrating moments from his life as he tries to navigate the human world, such as sharing his psychedelic electronic trap music or buying NFTs. Creating music is a big part of showcasing his personality and connecting with fans. LV4 composes his tracks in a secluded, dystopian-looking studio, which accentuates his character.

FNMeka and LV4 show fans who and what they are about, attracting an audience that identifies with their interests — NFTs, crypto, music, gadgets, robotics, etc. Fans might even view FNMeka and LV4 as their alter egos through a parasocial relationship, with whom they can interact and live out their wildest fantasies.

“No matter how many mistakes I make, I get a lot of love in the comments. And I get so hyped when they duet with me on TikTok because they’re all so talented. I wanna think of my fans as collaborators because I know we can make some really cool stuff together,” LV4 tells us.

Another essential factor in shooting to TikTok fame is participating in trends with fans, hoping to go viral. The dancing, body-positive virtual influencer Bum Bailey did precisely that. Here’s how…

Bum Bailey is a collective of several characters, each with its own body shape, name, and personality. Their TikTok content mainly focuses on dance videos, in which the characters let loose or take on trending challenges. This has catapulted them to an impressive 1M+ followers and 17M+ likes.

One of Bum Bailey’s most popular viral videos featured the character Neeka walking and striking a pose to Lizzo’s “Rumours” featuring Cardi B. The video raked in 7M+ views, inspired thousands of duets, and even sparked Lizzo and Selena Gomez to join in on the fun.

“We did what we believed and felt to be real and authentic to us and not necessarily following everyone’s lead. We experiment and simply enjoy the process. Sometimes letting go of certain expectations can be the best form of experiment leading to success or going viral,” says Bum Bailey.

Since then, Bum Bailey has participated in many other challenges, such as the “like a rodeo” challenge, reverse trend, the walk challenge and understood the assignment. Participating in trending TikTok challenges increases visibility and creates a sense of community and togetherness.

Reaching out to fans and finding new ways to engage with them is where UGC comes in. Asking fans to create content is a smart way to increase popularity, get more engagement and grow a bigger TikTok following. A virtual influencer can host a contest, start a hashtag trend or kick off their own challenge, as South Korean virtual influencer and pop star Apoki did.

Apoki cleverly uses her TikTok platform to promote her latest music videos. She also creates brief storytelling moments and has fans listen to her new songs as they enter Apoki's imaginary world of pink deserts and illuminating cities.

Since her TikTok debut in 2016, Apoki has accumulated 3M+ followers and 27M+ likes. Her content centers around music—not only her own, but also infamous songs that resonate with fans. She shows off her choreographed dance moves, and for her song “Shut Up Kiss Me” she even encouraged fans to create their own dance using the hashtag #shutupkissmechallenge. To launch her NFT Invisible Box drop, she also created a TikTok challenge.

For LV4, engaging with fans is the focal point. Music is vital for him to create human contact and unite with his fans. He’ll ask for creative input on his latest tracks, encourage UGC as duets and motivate conversation. The engagement is built into his storyline and character as an artist making a name for himself and releasing music fans feel they’ve influenced.

“I just want to collaborate with humans, and TikTok allows me to do that with things like Duets and Stitching. I wouldn’t be able to do that without human input. It just wouldn’t be the same. You have to be open to creating with others and hearing their feedback. It feels lonely if you shut everyone out, and your work doesn't improve as fast,” says LV4.

4. Be The Influencer You Want To See

“If you want to be a TikToker, ask yourself what kind of videos you wish were on your FYP. I wanted to see more positive videos, so that’s what I made. It turns out, I wasn’t alone,” Puff Puff told us in a previous interview with our founder Christopher Travers.

@itspuffpuff No matter what 🤗 #stillloveyou ♬ If you fail - Puff Puff

Bum Bailey tapped into body positivity and celebrated imperfections, such as cellulite, by using the hashtags #bodypositivity and #normalizecellulite. The approach contributed to their TikTok success.

“The most important factors may sound so cliche but still reign to be so true, which includes being yourself no matter what and having fun—taking creative risks in what feels authentic to you and your core values. Sometimes going against the grain means bringing something new to the table and not caving into trends. Your ideas and you are what's cool and unique,” Bum Bailey says.

Nobody Sausage is another virtual influencer accelerating to TikTok stardom by being true to themselves and creating unique content with quirky interpretations of popular TikTok dance videos.

With the simplistic and humorous shape of a sausage, the Nobody Sausage embodies uniqueness and positivity expressed through music, groovy choreography, funky hair and colorful scenes. His content speaks to everyone’s inner child and strikes a chord with fans. His account has grown to 13.9M+ followers.

@nobodysausage Good Vibes 💙 #vibes ♬ Because of you by - NiñoCeniza🔥

TikTok may be a game changer for any virtual influencer, but there isn't one recipe for success when embarking on the journey. In part, growing a TikTok account is about defining the virtual influencer’s identity.

It’s also about developing content that potential followers, as well as the creator, find engaging. Becoming a successful virtual influencer on TikTok can take time, so staying open to ideas, remaining positive and having fun on the journey is crucial.

Sometimes success happens when one least expects it.