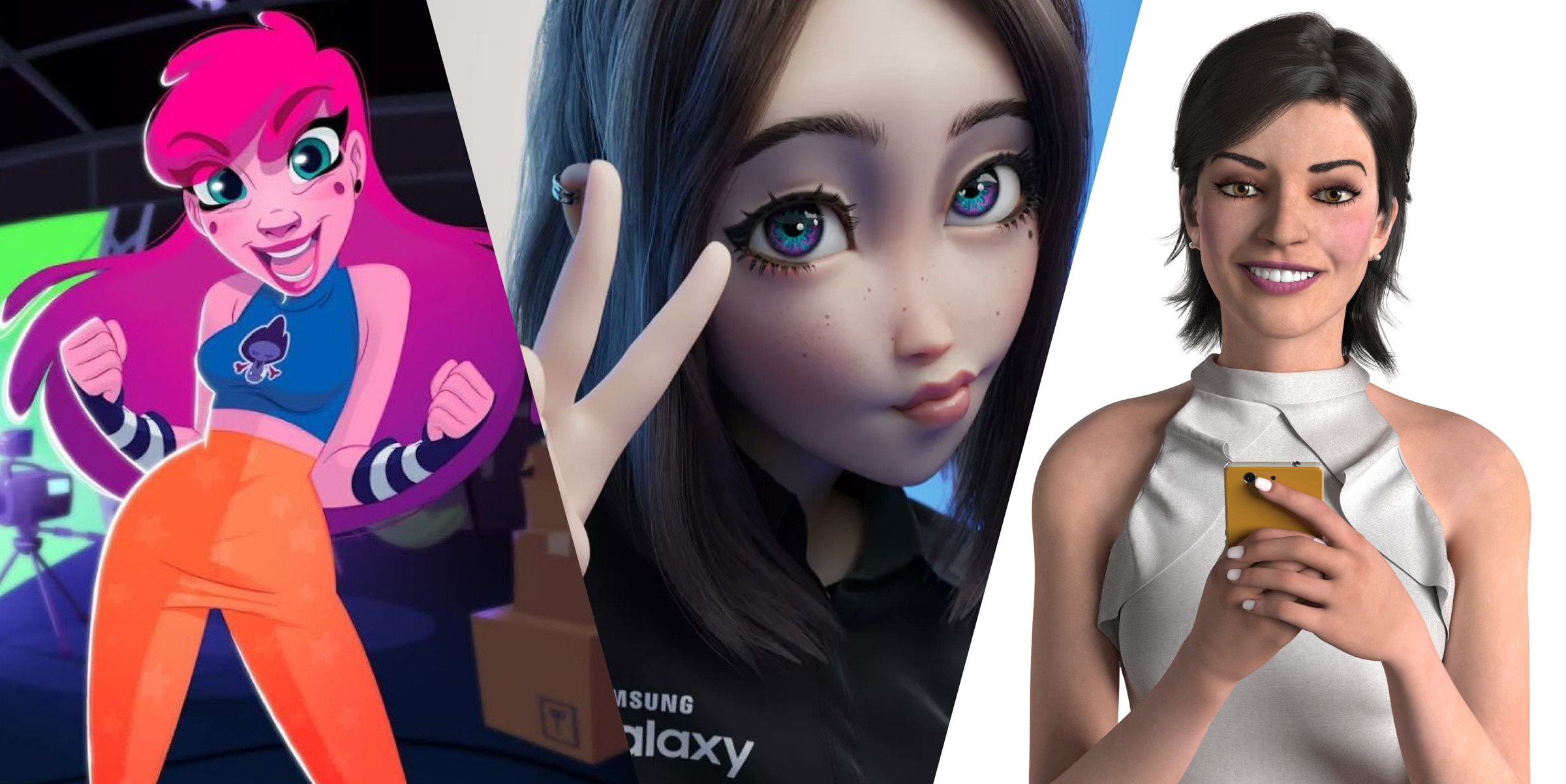 Photo by Any Malu, Samsung Sam and Lu of Magalu.

Why Are Virtual Influencers So Popular in Brazil? Brazil's Impact, Explained

A 2011 media law in Brazil played a foundational role in the global propulsion of the virtual influencer industry. Here's the story.

u of Magalu, Any Malu, and Nobody Sausage are among the top 10 most followed virtual influencers in the entire world. Collectively, they entertain over 40 million followers across social media platforms. What do these famous virtual influencers all have in common? They hail from Brazil.

Miquela Sousa, one of the most famous virtual influencers in the United States, is an LA-based, Brazilian model known to release her music in both English and Portuguese. The unofficial Samsung Sam, who went viral unexpectedly earlier this year, was created by international production house Lightfarm Studio, located in Brazil. Crazynho, a sensational, virtual monkey with more than 600,000 followers on TikTok, brags about living in Sao Paulo next to Brazilian soccer superstar Dani Alves. The list goes on and on.

So, why Brazil? Why are virtual influencers so popular in the country, and why do so many originate from the region?

From our research, we discovered two main events driving the relevance of Brazil in the virtual influencer industry:

1. The creation of virtual, Brazilian icon Lu de Magalu in 2003.

Let's dive into how the combination of Lu of Magalu’s influence as one of the world’s first popular virtual spokespersons, in addition to the 2011 law, propelled the development of the Brazilian animation industry––ultimately laying a foundation for the virtual influencer industry at large. First...

The Origin Story of Lu of Magalu

This virtual’s first name is simply “Lu,” and Magalu is a portmanteau of “Magazine Luiza.” Lu’s story traces back to 2003 when Frederico Trajano, CEO of Magazine Luiza, decided his Brazilian retail conglomerate of more than 12 brands needed a face or mascot for their new virtual store. The Luiza brand was well-known for selling appliances and electronics, so a virtual influencer seemed like the best fit to represent this exciting new technology.

Originally, Trajano created Lu to fill the void of an in-store salesperson for Luiza’s e-commerce websites, but over time her role expanded into that of an actual influencer. In 2007, Lu started her YouTube channel where she gave tutorials about technology that people could purchase from Magazine Luiza. Lu quickly became a Brazilian icon during a time when nobody was talking about virtual influencers.

Fast-forward over a decade to 2021: Lu is now one of the most popular virtual influencers in history, boasting an impressive 25 million fans across all major social media platforms. Insiders at Luiza have admitted that Lu of Magalu is one of their most valuable assets. Lu gave a face to a billion dollar brand that encouraged people to engage with Magalu’s products, from her unboxing videos to her technology tips, and more. Most importantly, Lu proved a virtual influencer as a brand spokesperson was a viable and successful model for other businesses to follow.

Her success set the stage for a 2011 law that kickstarted the Brazilian animation industry, which brings us to the second reason why so many virtuals emerge from Brazil:

In September of 2011, the Brazilian government passed Law No. 12.485 to regulate and strengthen the growing media entertainment industry in Brazil. The new law gave special priority to children’s animation produced by Brazilian studios to usher in a new era of popular shows such as Mundo Ripilica and Taina and the Amazon’s Guardians.

The effects of the law were immediately realized, spurring the rapid growth of the Brazilian animation industry. From 2013 to 2018, Brazilian studios produced 19 animated movies, almost 45% of the historical production in the country. The Annecy International Animation Film Festival even gave awards for two animated movies (Rio 2096 and Boy and the World) from Brazil in 2013 and 2014.

The federal and regional governments of Brazil understood the animation industry could act as an economic driver, creating thousands of new jobs for people all over the country. This animation boom propelled the founding of new independent production companies that built amazing technical teams to develop their content. In addition, many of them partnered with international studios that put the new characters from Brazil on a worldwide stage.

The beloved Roger Magrini shared his opinions on how these production companies transitioned to develop virtual influencers. Magrini is a 3D artist based in Brazil, specializing in photorealistic characters.

“[...] Brazil is mostly strong on advertisement. There are a few companies that focus more on VFX for feature films, and I hope the Brazilian movie industry grows bigger! For characters, I’ve seen a lot of cartoon characters, and not so much on the realistic side of things. Maybe with this amazing virtual human trend, realistic characters might be on the radar for the near future!” -Roger Magrini

Eventually, these studios developed the capacity and interest to delve into the world of virtual influencers, the natural evolution.

In 2015, Any Malu became one of the first virtual influencers with a vlog when she created her YouTube channel. Her outgoing personality and hot pink character design made her an instant hit among Brazilian children. Five years later, she was invited to create her own Cartoon Network show called The Any Malu Show. Now she is one of the few virtual influencers with a transmedia presence across the Internet and cable TV, with a combined audience of over five million followers across multiple social platforms.

In 2016, the Brazilian-American virtual influencer Miquela Sousa took the Internet by storm and became Instagram’s biggest mystery when she began cryptically posting her computer-generated selfies. Now she’s a celebrity with over six million followers and celebrates her Brazilian heritage by releasing music in both English and Portuguese.

Finally, in 2020 the New Zealand animation studio Lightfarm opened an office in Brazil to capitalize off the growing animation industry in that area. Their prototype for a virtual being AI-assistant called Samsung Sam went viral after Twitter users discovered the designs on Lightfarm’s website. Despite their history of working with virtual influencers such as Lu (who appeared in a recent music video advertising a new Galaxy phone), Samsung has not yet adopted Sam as an official virtual brand spokesperson.

Over the course of 10 years, Brazil has become the birthplace to several of the world’s most popular virtual influencers. In 2003, Lu of Magalu became one of the first virtual influencers in Brazil and redefined what it means to be a brand ambassador. Her popularity and influence demonstrated the growing animation industry in Brazil which was supported by the passing of the 2011 law. Since then, numerous virtual characters such as Any Malu and Miquela Sousa have become popular both within and outside of Brazil.

We’re excited to meet the next great virtual influencer to come from Brazil!

Okay, great! We will send you insights over time.
Oops! Something went wrong while submitting the form.
Pablo Lorenzana

Pablo is a Project Manager at Offbeat Media Group. Passionate about digital media and the evolution of avatars, Pablo researches the latest news in the virtual influencer industry. Pablo is eager to learn more about the stories and strategies that make CGI influencers so mystifying. Based in Los Angeles, Pablo is finishing the MS Fiction and Entertainment program at SCI-Arc, where he aims to refine his very own avatar: @caballo_perrro (yes, horse_dog!).