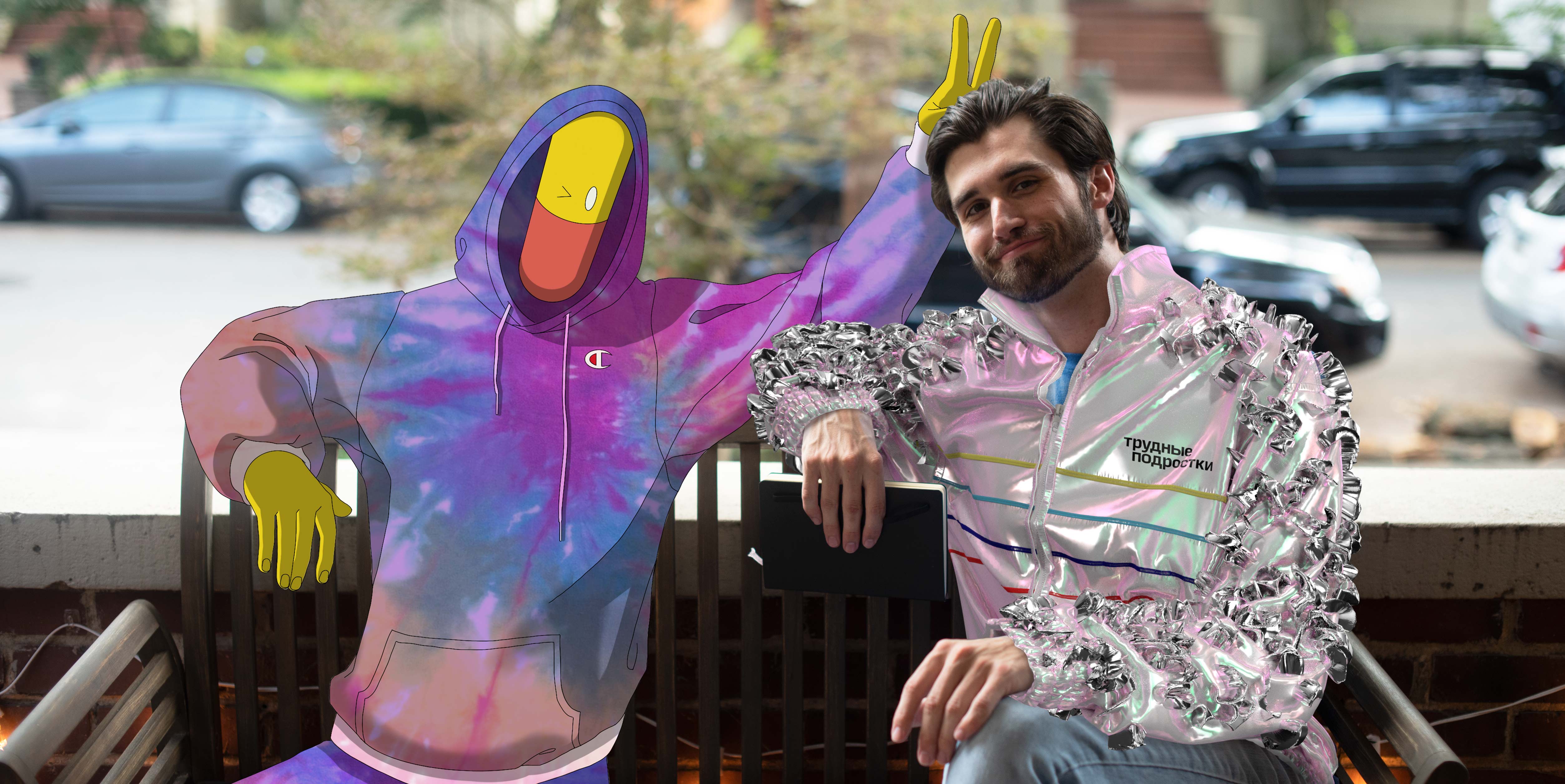 Who is Virtual Influencer and 2D Rapper-Producer Chill Pill?

"I just try to make stuff that I love and get excited about, and I hope it makes other people feel the same way."

hill Pill is a rapper and producer making a strong, quick dive into the music industry. With 130k+ monthly Spotify listeners and nearly 50k followers on Instagram, "Cpeezy" is catching the attention of many through his music, intriguing social media posts, and overall chill online personality.

We wanted to find out who Chill Pill is when he’s not wearing his producer or rapper hat, so we set out to get a full look below in this sit-down interview.

Hey Chill, I’m excited to speak with you! For starters, I’d love to know what a day in your life looks like. So?

Thanks bro! I’m excited, too. This is my first interview!!!!! A day in my life? I guess it's just me in the studio creating, sometimes by myself or with friends. I like to stay busy being creative with music or art, but usually after a couple hours I get bored and go down a reddit rabbit hole, grab some food, and jump back into what I was working on—or start something new. I read something once that said, like, 90% of writing is thinking about writing, and only 10% is actually writing. I feel like it’s the same with music, too. I usually just fuck around until something clicks and, when it does, next thing you know it’s been 12 hours. So yeah, I guess pretty much all day, everyday I’m just searching for moments of inspiration.

I got sick of hearing cartoon music, so I downloaded FL Studio (a beat making program) and started making my own shit. No cap, I was whack at first... but eventually got kinda ok. Then, I started sampling and listening to everything from the Beatles to rap and kept trying new things until I developed my own sound.

With 100k+ monthly streamers on Spotify, what do you think your fans love most about your music?

Damn, that’s a good question. You really should ask my fans. I just try to make stuff that I love and get excited about, and I hope it makes other people feel the same way.

What do you love most about your music?

I love the process of creating something from nothing. It’s weird, but sometimes I just zone out and start thinking about how music is really just vibrating air (like wtf). So, what actually ends up hitting your insides making you wanna dance or call your ex is intangible. The cook up is my fave part. 5 Michelin stars.

Not completely sure what you're getting at, but I'm here for it. Who, or what, inspires you?

What does your production process look like? How long does a track usually take you?

It all depends. Every song is different, but with Fuck the Club, for example, I was in the studio with Josh (goldn) and Keith (varon). We were just vibing, and I pulled up the guitar loop that I had made like a month before randomly. Josh just jumped in the booth and freestyled the hook. Keith and I added drums, bass, and stuff, and we all wrote the rest of the song.

Actually, that first version, besides the guitar and vocals, was completely different. It was much slower and had a lot more going on. A couple months later, we went into quarantine, and I kept singing the hook cause it helped remind me it’s ok to be in the house alone. So, I went on my computer, opened up the session, sped it up, replaced all the drums, and added new 808s. I sent it to josh who was with Sean. They both loved it, and Sean added some sauce, like lil ear candy sounds, and Josh stacked the second hook like 50 times so it sounds like a crowd—then we put it out.

After a month, I went back into the session to bounce the a cappella for remixing, and got inspired. I sped it up even more, then I found the crazy pluck sound, took out the guitar, and made an 808 out of a synth 'cause I wanted to see if that was possible. It sounded pretty crazy, so I sent it to Tim, my favorite A&R at Big Beat. He loved it, and happened to just have signed Raveanna, so he email intro'ed us. She’s fire and such a blast because she literally sent me three freestyle passes of her singing her own lyrics and melodies inspired by the original. It sounded like a completely new song lol, but we put it out as a remix cause it was so dope—so why not!

So yeah, that was that one, but every song is different.

That is an incredible origin story! Your fans obviously love you, but how do you feel about those who don’t understand you and only see you as an animation rather than a virtual influencer?

That’s cool, sometimes I don’t understand myself either. Not to get super meta, but like, if you think about it, everyone is technically “influencing”. So idk, I’m not super tripping over labels. Plus, I’m a cartoon, so comparatively speaking, how much influence do I really have next to, let’s say, someone like Mickey Mouse or Bugs Bunny? That’s a lot of pressure to have that kinda influence! It comes with all sorts of baggage, too, like executive boards and PR departments deciding what you can and can’t do. So idk, I prefer to let the universe influence me and let the art influence the culture.

What do you think makes someone human beyond physicalities?

Damn bro lol. I should’ve smoked before this interview. What a dope question. Maybe emotions—or experiences—probably both... ok, hold up let me Google this.

Wikipedia says “A being that has certain capacities or attributes such as reason, morality, self consciousness, and being a part of a culturally established form of social relations.”

What is one thing your fans wouldn’t expect to know about you?

I’m a sucker for a romcom that makes you cry at the end, but like happy tears. Like, I just watched that movie Onward—not a romcom lol, but oh my god... that moment when you realize his bro was the OG the whole time, I was like daaamn. My friend was like, “Bro are you crying,” and I was like, *sniff, sniff* “No, I just got something in my eye.” But, really tho, it was a mad emo moment lol.

Do you have any advice for your fans? What is one thing you would tell them to do in the pursuit of their dreams? ‍

Do it and make sure you're having fun along the way!

I see you hosted a remix competition where anyone could win a chance to work with you. What sprung the competition idea, and how did it go?

Who would be your dream collab on a track?

Where do you plan to take your online presence over the next few years?

I’m gonna make a cartoon record label and sign all my friends from the 2D world, then build a theme park.

Lastly—who are you and what’s next, Chill Pill?

Rapper + Producer + Cartoon. Also 2021 is gonna be crazzzy! I have a bunch of new music coming out. The next song comes out in January. Super excited to show you what I’ve been working on! I promise it’s been worth the wait! :)

Concepts Discussed
2D
Animated
animated character
Artist
Virtual Artist
rapper
producer
Got it. We'll be in touch!
Use LinkedIn? Reach out!
Oops! Something went wrong while submitting the form.