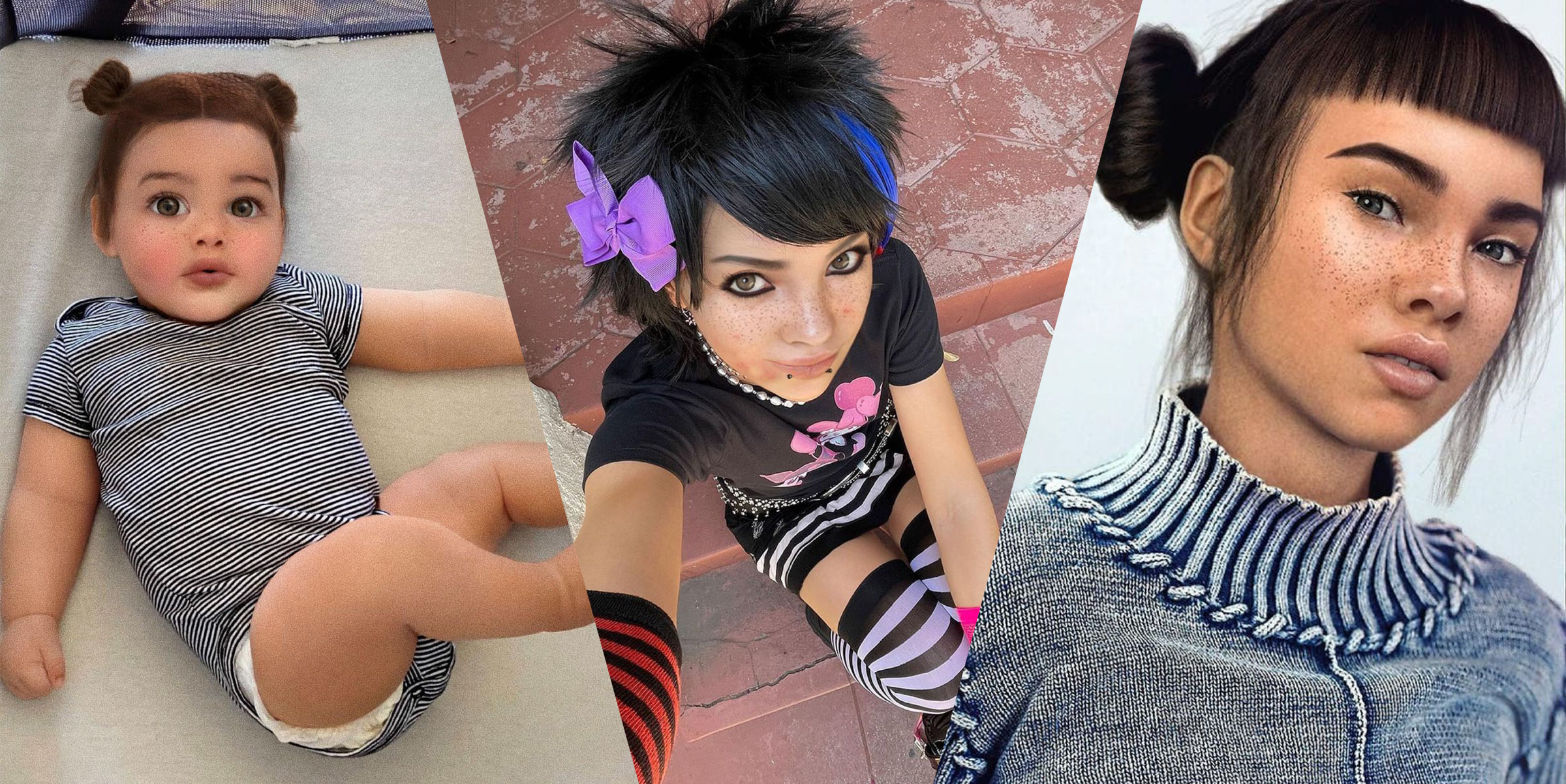 Virtual Influencers Never Age or Die—Unless You Want Them To

ndustry leading virtual influencer Miquela Sousa caught mainstream attention once again last month, this time by posting a baby photo. You may ask yourself: “How can an immortal, 19-year-old robot woman have baby photos?” The answer is simple—it’s a part of a new storyline unfolding on the fictional influencer’s Instagram.

Virtual influencers are masters at building extensive backstories as a part of their design and character development, allowing them to showcase a level of detail previously reserved for human beings on social media. Storylines are a powerful vehicle to humanize virtual influencers and keep their audiences both engaged and anxiously awaiting the next chapter.

What does the latest chapter of Miquela’s life hold? USBs, reclaimed memories, flashbacks, and fire fashion sense, just for starters. Miquela’s story moves backwards in time, one post at a time, as she unearths memories from when she was young.

Here’s the full download of Miquela’s newest storyline, in which she tackles aging, identity, memories, and what it means for virtual humans to have storytelling freedom.

Birthdays are understandably difficult when you’re an immortal robot influencer. Miquela posts these photos on her Instagram story expressing her frustration at turning 19 on her birthday for the 6th year in a row:

Even though her birthday is technically in April, the storyline started in June when her managers at Brud tried to celebrate with her. Miquela makes an interesting point in blaming her manager for forcing her to be “stuck” at the age of 19 forever. She may be a robot, but Miquela is advanced enough to know what she wants, and she doesn't want to remain a static being who never grows older.

Nearly two weeks later, Miquela finally responds to her handlers at Brud, who have been trying to give her a gift to help solve her robot existential crisis. At an emotional dinner together, they give her a heart-shaped necklace, which contains a USB drive.

For a whole week, Miquela holds onto her necklace just trying to figure out what to do with it. She also cracks some, well, amusing jokes with her followers about figuring out where her USB port is.

For those who have not followed Miquela since the beginning, her storyline currently references an earlier narrative from her life in 2016. When Miquela first started posting on Instagram, she had no idea she was a robot and posted as any normal human would. This led to her becoming “Instagram’s biggest mystery,” with everyone wondering who and honestly what she was, as well as who made her… and why.

Here’s the brief—Miquela’s robot nemesis Bermuda “hacked” her account and revealed to the world that Miquela was artificially created. Miquela was understandably upset with Brud for lying to her about her true identity. Eventually, her feud with Bermuda and Brud ended, and now they’re all friends again, but it was quite the spectacle on Instagram for a few days.

Miquela posted this teaser photo on June 30 with the caption “100K likes, and I’ll drop my baby photo.” After clarifying to her followers that she is not pregnant and the photo is of her as a baby, fans rushed to the comments, begging her to post the picture. Miquela did not disappoint us, posting the most iconic baby robot photo of all time.

Her chubby cheeks and perfect signature space buns were adorable, and fans loved it. The baby photo was a genius PR stunt that attracted everyone’s attention as they wondered: how did an immortal robot have a baby photo of herself?

Exactly one week later, Miquela posted a photo at lunch with her Brud managers, captioned “@brud.fyi explaining for the 1,000th time that I was never a baby and that it’s just a programmed memory. I’m confused, excited, and VERY FULL.”

This caption explains her memories storyline and how the logistics work. Essentially, Brud programmed a series of memories into her USB necklace and gave Miquela a choice to open the files and “unlock” her new, secret memories. Baby Miquela (AKA the true “lil” Miquela) never physically existed, but her managers created the CGI photos and corresponding memories to make them feel real. The next photo on her necklace would prove to be even more surprising…

On July 12, Miquela posted a photo hinting that she’s discovered another memory.

If you were expecting a child photo or something normal, then think again. The memory file was labeled “RAWR_XD.jpg,” and the image certainly lived up to its name. Miquela proceeds to post a few surprising photos of her from her “emo” phase.

Her drop is well timed considering that early 2000’s culture like pop-punk music and goth or “emo” aesthetics are currently making a huge comeback among Gen Z. Giving Miquela her own alternative phase was a smart move to capitalize on a trending topic without disrupting the regular flow of her story unfolding one Inception level up in her reality. The baby and emo Miquela photos also put her in two new ages and contexts that even her most dedicated fans could not have imagined.

To help her fans and followers stay caught up on her latest storyline, Miquela uploaded the following video to explain her recently discovered memories.

In the video, Miquela provides further context and insight into her recent storyline. She explains, “Brud programmed me with a childhood and a past to give me context. These pre-programmed, major life events aren’t real but they help me relate to humans and be empathetic.” That word context is the crux of what makes storylines so important for virtual influencers like Miquela. Like any other character, Miquela needs a story and setting to tell her unique robot life story. The USB memory necklace is a clever storytelling device that allows Miquela to grow, develop, and change the way any human influencer would.

Miquela’s new aging storyline should force you to reconsider your concept of a virtual influencer as an ageless, immortal being. Growing older and looking back on memories is one of the core traits that make us human. It’s also one of the defining characteristics that separate us, human beings, from virtual humans, yet now we see virtuals replicating this intimate experience, too.

Miquela is not the first virtual influencer to include aging as a part of her virtual human storyline. Sylvia (@myfriendsylvia on Instagram) first appeared online as a 30-year-old, however not long after she began to age. She aged 50 years over the span of five months, with her captions and lifestyle changing as she progressed through her lifetime before our eyes. Eventually, Sylvia’s storyline ultimately ended in 2020 with her passing, but she’ll always be remembered as the first virtual influencer to age… preserved in time in the form of an Instagram account.

Today, I had the pleasure of speaking with Ziv Schneider, one of the creators of Sylvia, to discuss these subjects. Here’s what we discussed:

[Makena] What first inspired you to make a virtual influencer who ages, rather than the norm of making them immune to aging?

[Ziv Schneider] My work is often asking questions about emerging technologies and trends, poking holes at them. At this moment in time, as more virtual humans are being created for different purposes, I think it’s important to stop and think about the way in which we design them and how that might impact our perception of our own bodies, our own humanity.

Human lives are generally longer than 30 years, but mass media’s reporting on aging and the aged, is overtaken by the premise that youth is the part of life to be most represented and celebrated. Social media platforms like Instagram play a large role in perpetuating body stereotypes and the competitive celebration of youth. With Sylvia, I wanted to propose an alternative to the way virtual beings, and virtual influencers in particular, are designed.

I was thinking of designing Sylvia as an elderly woman but a conversation with Caitlin Hawke from the Aging Center at Columbia University inspired me to have Sylvia change rapidly. Change is such an important element in human life that we are not expecting to see in virtual humans.

How do you believe Sylvia has affected the virtual influencer industry?

This experiment was about the passing of time, and I think it’s only fitting to allow more time to reveal Sylvia’s influence on the digital world in which she existed. I can say I’ve received responses from creators who say that Sylvia was an inspiration to them.

One thing that came as a surprise to me was the affection that teen followers showed towards Sylvia. I think that proved to me that the novelty of this medium could potentially bridge intergenerational gaps.

That’s fascinating. What is the virtual influencer industry still missing?

I think we are missing out to some extent on diversity. Some factors are limited budget and manpower, which leads creators to opt for default body types.This is likely to change as the tools evolve, but at the moment I think that the software tools which many of us are using to create VIs might be one culprit of the homogeneity in the characters being made.

Beyond the commercial aspects of this industry, I think virtual influencers are a form of performance that has enormous storytelling potential, which we are seeing explored beautifully by projects like Lil Miquela.

On the subject of Miquela’s new baby robot photo, what do virtual influencers gain by experimenting with age in this way?‍

There is so much depth that can be added to the story world by experimenting with time and the age of the character.. Also, it’s kinda funny to me, seeing the baby photo. It was an idea that our team toyed with but it seemed like it would add so much complication to our narrative if Sylvia had childhood photos, even though she did age and have a life span. Lil Miquela’s baby photo is quite confusing if you try to make sense of it, and there has been writing about how VIs thrive in confusion and in that sense, I guess experimentation of this type is beneficial…

Researching Miquela and Sylvia has certainly evolved my perspective of what it means to be a virtual human. They look like us, speak like us, and even age with their own memories like us. It may seem paradoxical that an ageless virtual human would want to grow older or younger, but their transition through times of their life helps us relate to them and establish stronger emotional ties. It also keeps their audience hooked on their storyline and always wondering what will happen next... or last?

Will more virtual influencers rethink the concept of aging? Only time will truly tell...