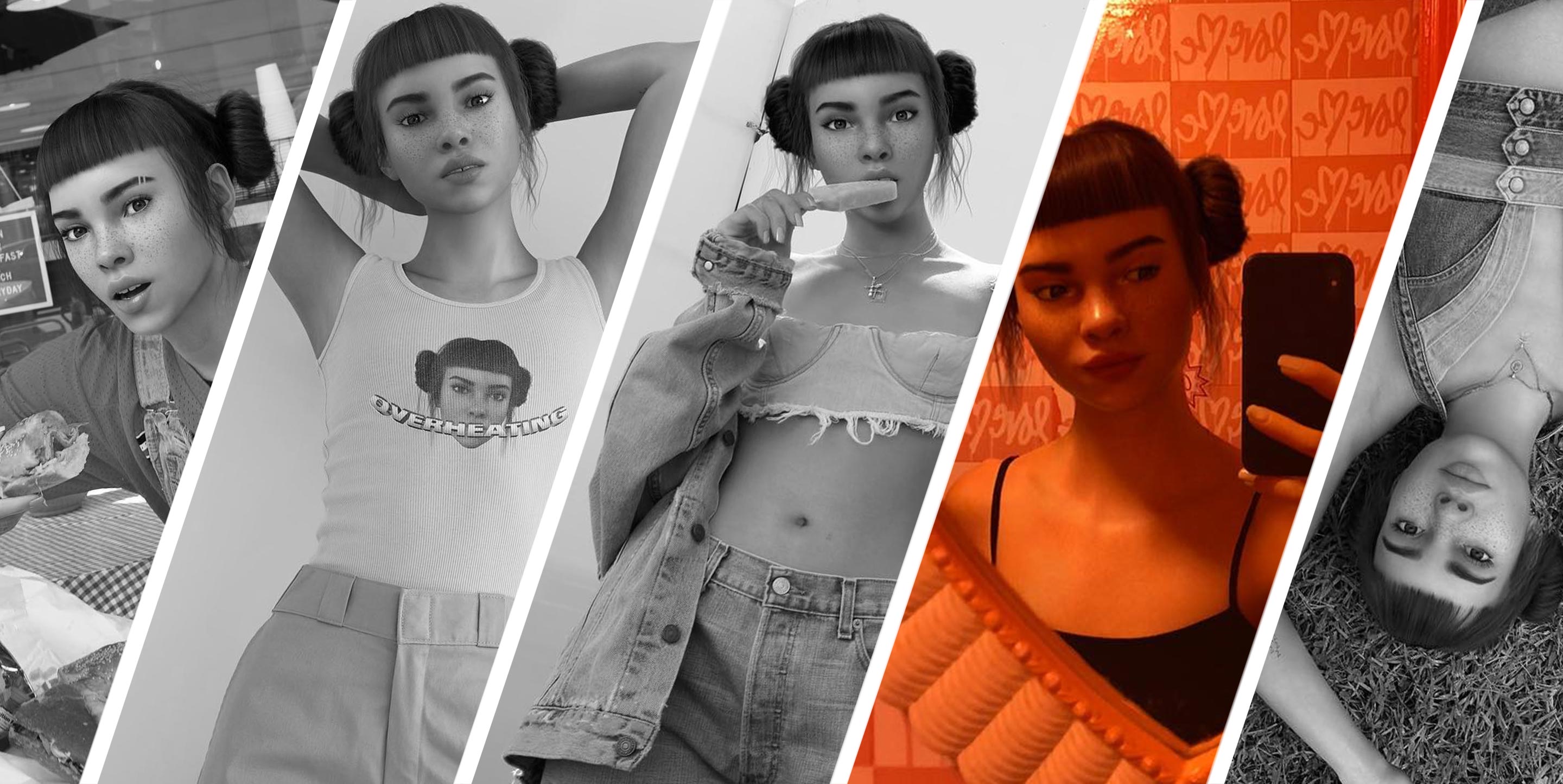 Part four of our five-part series observing the careful balance between being “insta-famous” and being relatable, in partnership with Deya Aliaga Kuhnle.

"There’s more to the art of taking the perfect selfie than one might think. According to professor and researcher Katrin Tiidenberg, a selfie must be “a photographic, visually self-representative, and networked object.” Further, Tiidenburg outlines the following five inherent motives for taking a selfie:

‍Deya expands on these definitions below. Despite frequent criticisms and associations with vanity, selfies are an essential part of most influencers’ feeds, for humans and virtuals alike. While the effort of taking a selfie for a human differs vastly from the process of creating a virtual human’s selfie, the intent and creativity involved is all the same.

We partner with Deya Aliaga Kuhnle on this five-part series in appreciation for her work studying virtual influencers. You can read her entire master's thesis here, from which the following article derives." ‍

iu, Lu, Yang, Qu & Zhu (2015) define a selfie as “a self-portrait picture taken by oneself using a digital camera or a smartphone for posting on social networking sites.” (Qiu, Lu, Yang, Qu & Zhu, 2015, p. 443) Similarly, Tiidenberg (2018) touches on the necessity of a “self-representational” practice through the evidence of a photograph taken or made to look like it is taken of oneself. (p. 359) Drawing from these definitions, the only selfies that were considered ‘selfies’ for the purpose of this thesis were self-portrait pictures of Miquela and Emma in which the “digital camera” or “smartphone” is visible in the photograph itself. Without a visible smartphone or camera, it can not be said with certainty that an image is a self-portrait. Thus, for the purpose of this cultural script, Figure 15 and Figure 16, images in which a smartphone is seen within the frame of the image will be discussed.

Figure 15 is a selfie taken by Miquela of herself in a heart-shaped mirror; the colors of the image are warm and the lighting is relatively dark, suggesting poor lighting in this photograph. The darkness of her face and the way the light source appears to fall onto her body is once again an illustration and dedication into the realistic portrayal of Miquela as a three-dimensional, hyperreal human. LilMiquela is holding up a black phone and appears to be looking at the phone’s viewfinder to take this photograph. She is wearing a black singlet, her hair is pulled into buns on the side of her face, and she is not wearing any jewelry. The wallpaper of the room and the background of the image is a repetitive gallery pattern of the words, ‘love me’ written out over and over again in varying shades of pink.

In Figure 16, Emma appears to be in a bedroom in front of a large mirror, snapping a selfie of her outfit as her face is covered by the phone. There is a drawer in the background as well as two carpets and what appears to be a bathroom. Emma has a stylish outfit consisting of a white tube top and high-waisted, camouflage pants on. Emma is posing for the snap with her right hand tucked into her pocket, and her hip popped out slightly.

Interestingly, Emma’s caption appears to be joking about the camouflage pattern of the pants, and the way the caption is written with abbreviations for words like “are” and “I am” seems to suggest it was written quickly and effortlessly. Meanwhile, Miquela’s caption seems to be the music file name of a popular song by rapper, 21 Savage called “No Heart”. This seems like a pop culture play on the heart element in the photograph, which suggests a rather witty, relevant and clever double meaning with the suggestion of ‘No heart’ in the caption.

While Figure 15 similarly appears to be a quick snap and a casual selfie, when put into context and seeing as Miquela is a digital avatar and the visual is a piece of art, one can only imagine the amount of forethought, planning, and production necessary to create this work. The creation of this selfie and the construction of it can be argued to be a representation of not just how traditional social media influencers use selfies, but also how social media audiences and users use the platform to express themselves through the use of self-portraits. A selfie, as Abidin (2016) describes, is often seen as a frivolous, casual act with no deeper meaning, but it seems that this cultural script of taking selfies is significant enough to post as an influencer that the creators of Miquela have spent both time and money in the construction of this visual.

When referencing back to the six functions of selfies practices as presented by Tiidenberg (2018, p. 943), both of these images can perhaps be considered to fall within the ‘interact’ function through their jokes in the captions or simply ‘work’ to generate attention and gain popularity on the platform though the true intentions of the selfies are impossible to clarify without speaking to Miquela or Emma themselves. The partaking in this culture includes the posting of selfies in perhaps an attempt to create an authentic representation (Audrezet, de Kerviler & Guidry Moulard, 2018, p. 2), as a means to generate fame and popularity on Instagram (Schwarz, 2010, p. 180) through taking “photographs of ourselves for the consumption of others.” (Marwick, 2015, p. 141).

‍This concludes part four in our five-part series observing the careful balance between being “insta-famous” and being relatable. Read Deya's full thesis here.

Okay, great! We will send you insights over time.
Oops! Something went wrong while submitting the form.
Deya Aliaga Kuhnle

Deya is a Digital Business Manager who works heavily within the digital media industry. She loves helping others discover the potentials of the digital realm, managing and running remote businesses, and eating great food.