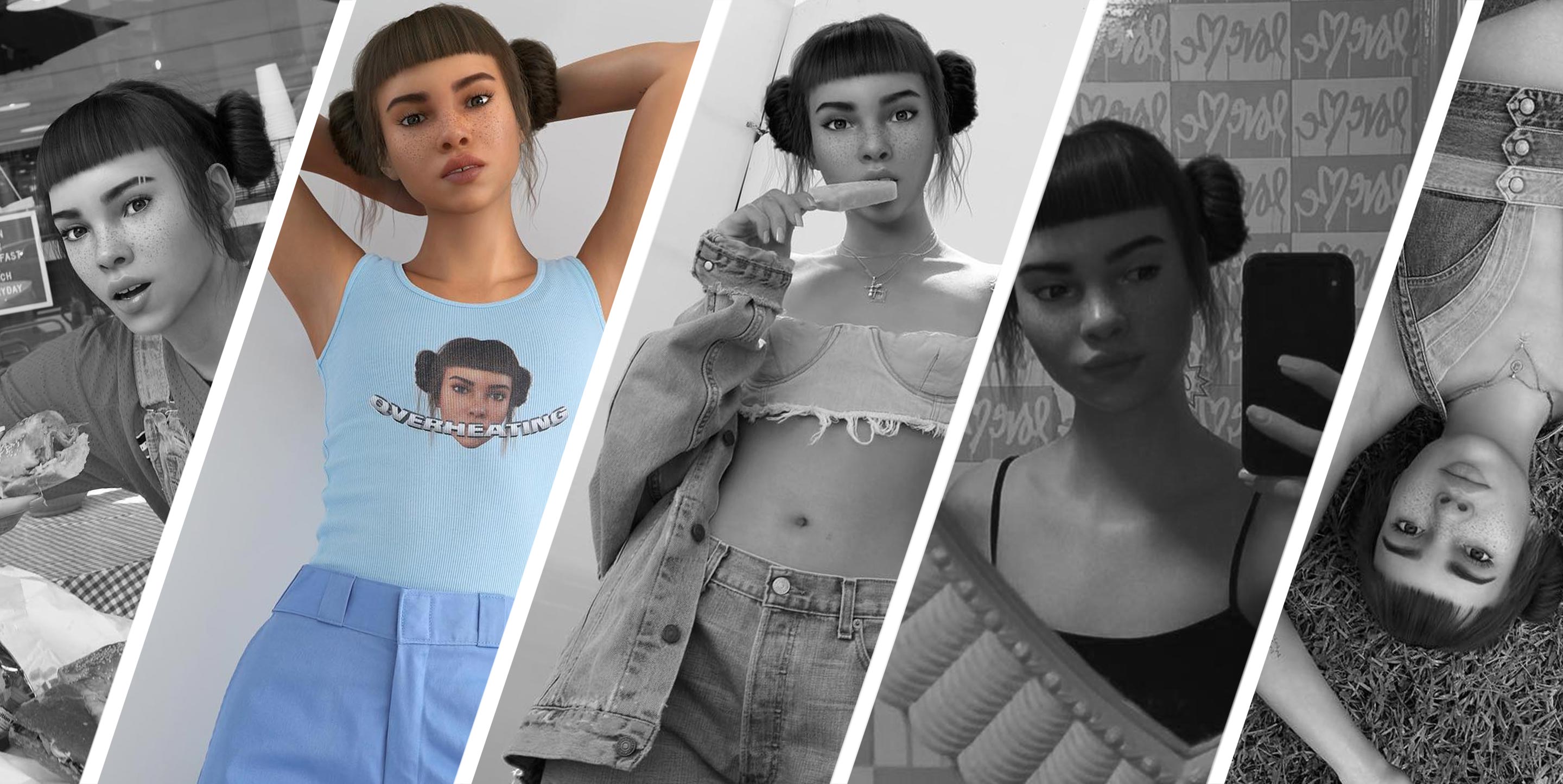 Comparative Analysis of Virtual Influencers: On Personal Branding and Commodification of the Branded Self

Part two of our five-part series observing the careful balance between being “insta-famous” and being relatable, in partnership with Deya Aliaga Kuhnle.

"The influencer life does not end with amassing an engaged fanbase – those who earn significant klout face a unique opportunity for financial gain from sponsorships and merchandising. Converting one's influence into something monetizable, and financially justifiable, requires pristine personal branding and a focused, in-touch effort. Said successful brand development is an influencer’s golden shot to stand out from the red ocean of online personas, not only to their loyal followers, but to well-established brands and potential followers as well.

As the advertising industry becomes increasingly saturated, brands turn to human influencers in search of authentic collaborations and personal brand endorsements. As younger generations mature into the consumer demographic, influencer partnerships become an increasingly valuable access point for brands to adhere to the entertainment-driven interests of younger audiences. With the onset of virtual influencers, brands are taking the next, innovative step towards humanizing one's message with more influence, engagement, and control than human influencers, captivating consumers on a new playing field as we delve deeper into this digital, entertainment-loving age.

Influencer merchandising is another pathway to a profitable end. The art of successful influencer brand merchandising roots from one's ability to resonate with an amassed following in the real world, monetarily. The biggest fans take an influencers face or message, whom they've likely only ever interacted with in a digital medium, and pay money to spread it in their lives through shirts, stickers, and other offline mediums. In turn, merchandising becomes a symbiotic relationship between influencer and follower: the follower gains inspiration, a sense of community, and a role model, while the influencer gains support, growth, capital, and, ultimately, mission fulfillment.

We partner with Deya Aliaga Kuhnle on this five-part series in appreciation for her work studying virtual influencers. You can read her entire master's thesis here, from which the following article derives."

ithin the area of personal branding and the commodification of the branded social media self, both Miquela and Emma Chamberlain have multiple instances in their Instagram feed. For the examination of this cultural script, four images were selected.

The commodification of the personal brand including opportunities for releasing merchandise based on a personal brand or conduct brand sponsorships and collaborations with established companies and brands. In Figures 5, 6, 7 and 8, aspects of being popular and internet famous begin to emerge and are more obvious than in other visuals; only those that have achieved a true level of online stardom are able to release their own merchandise and apparel line or partner with large brands such as Calvin Klein, Samsung, Tommy Hilfiger, and Hollister.

Commodification of the Branded Self: Merchandise

Miquela is seen in Figure 5 standing in front of a plain white background. She is wearing a blue singlet with a graphic of her face and the word “overheating” over it as well as-high waisted light blue pants on. Her arms are behind her head, and she has her hair in the regular buns on the sides of her head with a few loose strands hanging out. She is staring directly at the camera. The texture of her face, as well as the way the light falls onto Miquela’s arms, face and neck show depth and make her appear lifelike.

In Figure 6, Emma is smiling with one arm and one leg raised. She has on a blue T-shirt on that features a graphic of Emma as a centaur with an iced coffee and a rainbow, trees, and mountains in the background; the T-shirt is tucked into high-waisted denim shorts. Emma seems to be standing on a balcony, and natural forms of clouds and trees along with architectural forms of ordinary-looking buildings can be seen in the background.

Figure 5 and Figure 6 both proffer more meaning with context taken into consideration as both images were posted in efforts to sell the influencers’ merchandise. In Figure 6, Emma’s shirt can be seen to feature her as a centaur and is a form of commodification of the branded self which her brand being relatively quirky and random. Emma has commodified her personal brand not just through her fame but also by capturing her unique personality and why her followers enjoy her content and love her as an influencer. Emma, herself, is essentially the product and why she is the main focus on this piece of merchandise.

Similarly, in Figure 5, Lil Miquela’s merchandise also features an image of her face with the text “overheating”, which is seemingly a play at her being a robot. Her recognizable hairstyle and face are commodified by this photograph and product; she is the brand and she is what is being sold to her followers.

The perks of having a loyal following in the “attention economy” as Marwick (2015) writes are vast. Millions of followers are on hand who love the personal brands that have been designed by both Emma and Miquela, and the purchasing of this merchandise can be thought of as a way of supporting your favorite online personas and to be closer to them. By examining Emma’s caption in more detail, the phrase “[...] if u wanna twin w me” stands out — ​if you’d like to dress similar to Emma, you can easily do so by purchasing her merchandise. The way that the caption has been constructed with shorthand and emojis also gives off a vibe of a lack of effort and casual nature. In reality, however, the production of a branded apparel line requires much planning, investment, and thoughtful promotional tactics. Figure 6 could technically also be a form of this carefully planned promotional tactic.

As Berryman & Kavka (2017) have suggested, this exemplifies the coming together of “commodification and celebritifaction, using the one to fan the flames of the other.” (p. 309) In the branding of their own online personas, both Emma and Miquela are able to then monetize their digital characters to sell merchandise to their loyal followers.

Commodification of the Branded Self: Sponsorship

In Figure 7, Miquela is seated on the floor, leaning in the corner of a bright pink room. Although the pink of the room seems to be digitally generated in nature, it is still a relatively dark photograph in terms of lighting. Miquela is holding a phone up in her right hand and appears to be looking into the phone, and she has on a turtleneck sweater, high-waisted pants, and dark boots. The pictorial space is constructed in such a way that shows depth as Miquela’s feet are bigger than her head as her feet are ‘closer’ to the camera. The illusion of dimension creates a realistic and three-dimensional photograph that shows a “sense of logic, placing us at a particular point of space in relation to that which we are viewing” as described by Khan Academy (2018).

The patterns and textures on Miquela’s sweater, along with the spiral lines on the pink walls seem ‘trippy’ as they form an optical illusion known as the moire effect (Baraklianou, 2014); this happens when multiple patterns placed closely together in television or images end up being distorted. Baraklianou (2014) writes, “the misalignment occurs due to the frequency of the photographed pattern coinciding with the frequency of the capturing chip.” (p. 81) What is interesting to note is that this happens when something is photographed, which suggests that Miquela’s creators purposefully created this effect in attempts to suggest it is indeed a real photograph taken of Miquela.

Figure 8 is an image of Emma, looking tanned and fit by societal standards, seated in a pool-side recliner chair. She has on a light blue bathing suit, sunglasses, a necklace as well as a red hat with monstera plant prints. Emma’s hands are behind her head and appear to be adjusting the hat that she is wearing; Emma is looking down in the photograph, perhaps unaware of the photo being taken. The shadow of the person taking the photograph can be seen as well as the phone that is taking the photograph, but there are no other major elements in the background of the image.

These two photographs were chosen for this cultural script as another form of commodification of the branded self conducted by influencers: brand sponsorships and collaborations. Through the growth of a personal brand, influencers can easily exercise their influence on their followers and fans using their platform of millions of followers. In Figure 7, Miquela does just that with a partnership with Samsung Galaxy, who is tagged on Instagram as a paid sponsorship. The image itself features a lot of bright colors in the background with the dimensions of the photograph arguably pulling you into the subject of the image, Miquela. She is holding the product in her hand and may be taking a selfie of herself using it.

In Figure 8, Emma is seen in an uncomplex photograph on a pool chair with a swimsuit on and a cap. The background is bland, and there are not many components to the photograph. The main subject is Emma, and the image does not look particularly glamorous, edited or high quality. Context plays a role as it reveals that the tag of the photograph which says this is a paid sponsorship with Hollister, the swimwear brand. While the formal analysis sets the technical basis of the image and draws attention to, for example, the shadows in the image show the phone and the photo being taken of Emma, the context is what gives meaning to the purpose of the piece of media.

Both Figure 7 and 8 are clear sponsored posts as disclosed by both influencers in the posts. Interestingly, even in images that do show a specific level of fame, wealth and exclusivity, the struggle to be relatable is still prevalent in the overall presentation of the visual. The use of humor in captions for relatability can be thought to be attempts to look like they’re trying ‘less hard’ than they actually are when producing content for Instagram. In Figure 7, Miquela’s caption includes the phrases, “[...] Naming him Samuel Phoington III. We’re tight. I love him. And he’d never make a toaster joke about me.” This casual nature plays off the carefully outlined and professional collaboration with Samsung. In a comparable fashion, the caption of Figure 8, “i edited this picture to make me look tan im not actually tan at all” accompanies an image sponsored by billion-dollar brand Hollister. The caption seems to offset the brand collaboration by showing that even influencers edit their photographs and that Emma has imperfections and insecurities just like her followers. The caption seems to downplay the subsidized brand deal that most of Emma’s followers would not be able to attain and thus, may not be able to relate to.

This concludes part two in our five-part series observing the careful balance between being “insta-famous” and being relatable. Read Deya's full thesis here.

Okay, great! We will send you insights over time.
Oops! Something went wrong while submitting the form.
Deya Aliaga Kuhnle

Deya is a Digital Business Manager who works heavily within the digital media industry. She loves helping others discover the potentials of the digital realm, managing and running remote businesses, and eating great food.