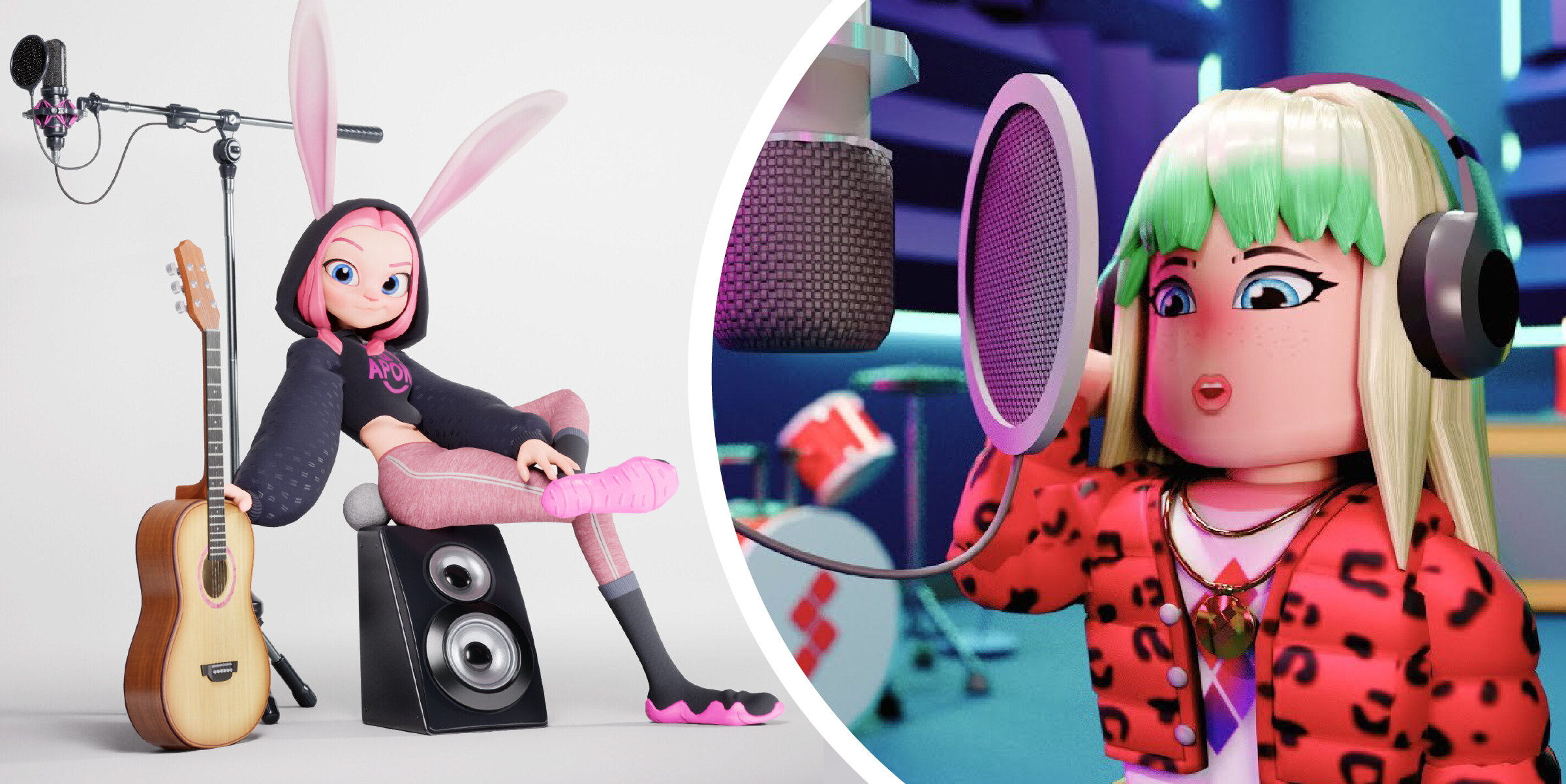 Photo by APOKI and Kaifromsplash.

hether you know it or not, multiple virtual beings have been releasing music for decades. Maybe the name Hatsune Miku rings a bell? This 2D virtual influencer took the world by storm in 2007, now creating totally crowd-sourced, viral hits for over a decade. Hatsune Miku now collaborates with massive artists like Ashnikko and Anamanaguchi, and hosts holographic, high-energy concerts for thousands, while selling tickets to people around the world to see her perform.

However, Hatsune Miko is only one example. There are an increasing number of virtual artists innovating in the virtual production and music industries, creating incredible, well-loved music along the way.

Today, I’m reviewing some of the best new music released by virtual influencers.

Teflon Sega is a virtual influencer and mysterious R&B producer known for releasing dreamy synthwave music on Soundcloud. With millions of plays across Spotify, Soundcloud and YouTube, Teflon Sega has been releasing music steadily since his introduction to the world in 2016.

Although the style of his music has not changed, it has developed.

APOKI is a Korean virtual influencer and musician specializing in a mixture of electronic music and contemporary pop. While traditional KPOP music focuses around a group of people combining their aesthetics together into one grand sound, APOKI takes the best of herself and magnifies it through impressive lyric displays. Her recently released track “Coming Back” highlights this best. APOKI switches between English and Korean lyrics flawlessly, using upbeat sound patches to emphasize her wide vocal range.

All in all, “Coming Back” is a catchy pop song that’s easy to dance to, which is exactly one of APOKI’s specialties.‍

While the EP is a cohesive walk through electric pop, the stand-out track “Breathe Again” exists as an uplifting jam dedicated entirely to her fans. By mixing a soft trap drum with singular reverbed guitar chords, “Breathe Again” encourages listeners to embrace their happiness, and find freedom in those they care about. Considering that KaiFromSplash openly thanks her fans for encouraging her venture into music, “Breathe Again” serves as a “thank you” to all that have helped her find her voice.‍

The hip-hop artist and famous TikToker FN Meka is back. After a musical hiatus of almost three years, Meka has returned with a new track and a new sound. Although FN Meka’s last two tracks (titled “Internet” and “Moonwalkin’”) followed the early Tyler the Creator style of acid-rap, his most recent release does something different.

“Speed Demon” introduces a different side of Meka, utilizing video game-esque sound effects and a Migos-inspired triplet beat. It’s too soon to say whether or not this track will result in a full album, but if the new FN Meka maintains this sound, then it’s guaranteed to be a smash.
‍

Meanwhile, on the polar opposite side of synthetic beats, 8ubbles is working on something bouncy. Inspired by the house scene in Eastern Europe, 8ubbles is an electronic producer that specializes in various forms of techno, nighthouse, club and bounce. The spectrum of electronic music is huge, meaning that 8ubbles has a lot of material to work with.

In the newest track “Tremendous Physique,” 8ubbles partners with dubstep power-duo Birthdayy Partyy to bring a bass-boosted banger. With vocals of “yeah” and “show me your tremendous physique” acting as producer tags, “Tremendous Physique” explores elements of nightcore and tech house in a powerful, “get your butt moving” type of way.‍

Rounding out this list is my personal favorite: Yameii Online. While Yameii Online typically mixes Internet-core aesthetics with elements of hyper pop, the recent track “Baby My Phone” explores glitchcore and vaporwave in a cutesy, bouncy way. While the track is an absolute bop, “Baby My Phone” truly exploded across TikTok––inspiring dozens of mashups, recreations and trends based on the ringing of the telephone.

“Baby My Phone” also experiments with speed, slowing down and speeding up to correspond with the different parts of the track. As a listener, Yameii Online has done something extraordinary. By taking the listener on a musical journey with only a handful of lyrics and Animal Crossing-esque sound bytes, “Baby My Phone” is a great example of the power of creative minimalism.

Are virtual influencers the future of music?

While virtual influencers are an innovative way to elevate media experiences to a new level thanks to their digital (yet human-centric) nature, they are especially opportune to disrupt the image-valuing music industry at large. From the rising popularity of hyper pop and glitch-inspired music to creative sound byte sampling and more, all signs are pointing towards virtual genres as the future. With the increasing success of virtual beings as musicians, it makes sense that virtual beings will inevitably become high-profile celebrities with blossoming music careers in the coming years.

Virtual influencers have always integrated into digital mediums with ease, and are accepted as humans in the digital sphere. This crucial hall pass allows virtual beings to succeed in music just like human counterparts have done in the past––and even surpass them thanks to their longevity, portability, dynamicism, collaborative creative nature, and more.

Will one of these artists be the next Billie Eilish? Without a doubt.